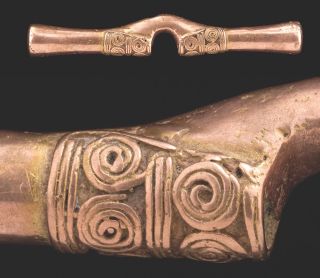 When Apple revealed the new iPhone 8 earlier this month, some headlines focused on one question: Would it come in rose gold?

The pink-tinted metal is still having a moment. Made from a mix of gold and copper, rose gold got its start in the 19th century, when it was known as "Russian gold," according to Sotheby's. (Carl Fabergéused it in his ornate eggs.) And the blushing color has been going in and out of fashion ever since.

But really, the history of the trend may stretch back much further. Archaeologists recently found an unexpected preference for pinkish gold jewelry from the first millennium in present-day Colombia. [Gold Rush Shipwreck: Photos of a Real-Life Underwater Treasure Hunt]

"What's peculiar about finding it here in Colombia is that the whole Andean region is renowned historically for mastering the technology of gilding —that is,making metals more golden than they should be based on their composition," said Marcos Martinón-Torres, an archaeologist at University College London and co-author of a new study published Sept. 25 in the journal Antiquity. Rose gold, meanwhile, brings out the (cheaper) copper components of a metal mixture.

The most familiar type of gilding involves applying thin gold leaves onto the surface of a less valuable metal. Andean goldsmiths also pioneered a technique called "depletion gilding."They would start with a mixture of gold and copper. Then, through oxidation and polishing, they could bring the gold to the surface to make the metal look purer, Martinón-Torres explained to Live Science.

Martinón-Torres and Juanita Saenz-Samper of the Museum of Gold in Bogotá, Colombia, examined 44 pinkish metal artifacts from the Nahuange culture—including nose pendants, necklaces, earrings, belts and bracelets. Little is known about the people of the Nahuange period (A.D. 100 –1000). But archaeologists do know they were skilled metalworkers, based on the artifacts found in their scattered villages in the Sierra Nevada de Santa Marta mountain range, near the Caribbean coast.

The researchers found that theNahuange artifacts underwent the depletion gilding to turn them golden at first. Then instead of keeping the gold color, the Nahuange intentionally burnished these objects to expose the pink and orange hues underneath.

"That defies our expectations that the more golden the better," Martinón-Torres said. "For the Nahuange, things are not quite so simple."

Rosy gold artifacts have been linked to Quimbaya culture in Colombia and the Taino societies of the Caribbean, but Martinón-Torres said this color preference is most conspicuous among the Nahuange.

More research could reveal the motives behind the Nahuange penchant for rose gold. For now, the authors speculated that gold ornaments could have been transformed to rose gold at different stages of their use. Stripping the gold could have been part of a funerary rite for metals that were buried with the dead. Or, these objects might have been ungilded when they were given to a girl as she went through puberty. (Martinón-Torres noted that ethnographic studies from the region have connected red and orange colors with femininity.)