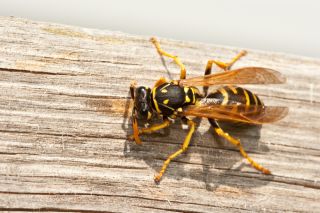 A sting from a yellow jacket is typically a minor annoyance, but a wasp bite turned into a major medical problem for a 45-year-old British man: He had a severe allergic reaction to the bite and, as a result, suffered a heart attack, according to a recent report of the man's case.

The man was diagnosed with Kounis syndrome, or "allergic myocardial infarction," in which a severe allergic reaction is accompanied by symptoms of chest pain (known as angina) that may progress to a heart attack.

Although Kounis syndrome is rare, there are medical case reports of the syndrome that have been linked to allergic reactions to foods, insect stings and certain drugs. [27 Oddest Medical Cases]

In this man's case, he was stung by a yellow jacket on his left arm as he got into his van. Minutes later, he began to feel dizzy and itchy all over, and a rash appeared on his body, according to the case report.

The man's left hand began to feel heavy and achy, and hours later, this pain became more frequent and spread to his left arm, shoulder and back. He called for an ambulance, and on the ride to the hospital, he suffered a heart attack, the case report said.

Paramedics were successful at resuscitating him, but doctors were initially unsure what caused this life-threatening emergency.

From allergy to emergency

The man had been stung by insects multiple times in the past, but he experienced no reaction to these bites, according to the case report's lead author, Dr. Benjamin Cross, who, at the time of the case, was a medical student at Blackpool Victoria Hospital in Blackpool, England.

The man has a genetic tendency to develop allergic diseases, including a medical history of asthma and eczema, Cross said. However, the man had never had a severe allergic reaction, Cross said.

But there were some reasons to be concerned about the man's heart heath. The 45-year-old had been smoking a pack of cigarettes a day for more than 30 years, Cross told Live Science. (Smoking has been linked with an increased risk of heart disease.) Prior to this incident, the man had some buildup of plaque in his arteries, which also put his heart at risk, Cross said.

But why would an insect sting trigger a heart attack in a middle-age man?

The wasp bite most likely caused a type of white blood cell, known as mast cells, to react, which, in turn, caused the plaque in his artery to burst, Cross said. When plaques burst, it causes a clot, which blocks the artery and reduces blood flow. A loss of blood flow to an area of the heart causes heart cells to die, which results in a heart attack, Cross explained.

To repair the man's blocked artery, doctors inserted a stent. After he went home from the hospital, his allergist recommended that he receive allergy shots containing small doses of the wasp venom that initially triggered his severe allergic reaction, Cross said. This treatment will sensitize his immune system and reduce the chance that another yellow-jacket sting will cause an allergic reaction, he added.

But as a precaution, the man was advised to carry an EpiPen, which can deliver a quick dose of the hormone epinephrine, to help prevent another severe allergic reaction, Cross said.

The case report was published online Sept. 7 in the journal BMJ Case Reports.