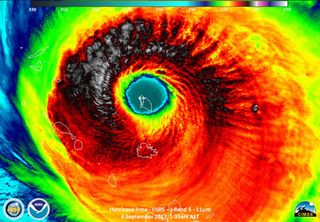 The storm battered the island of Barbuda during the wee hours of the morning today (Sept. 6), but not before the entire island was engulfed in the hurricane's eye. The image was captured by instruments aboard the Suomi National Polar-Orbiting Partnership spacecraft.

In the image, Barbuda — which is 62 square miles (162 square kilometers) — is completely dwarfed by the monstrous eye of Irma. The "eye" is the eerie core of a hurricane, where clear skies and light breezes belie the monstrous wall of towering thunderstorms, called the eyewall, that fringes its edge. Most hurricane eyes are between 20 and 40 miles (32 to 64 km) across, meaning the roughly circular center of the hurricane encompasses an area ranging from about 1,250 to 5,000 square miles (3,200 to 13,000 square km), according to the University Corporation for Atmospheric Research.

Based on satellite data, Hurricane Irma's eye is roughly the size of metropolitan Detroit, at about 1,300 square miles (3,400 square km), the Detroit Free Press reported. Hurricane-force winds (at least 74 mph, or 119 km/h) extend 50 miles (80 km) from the center of the storm, and tropical-storm-force winds extend 185 miles (298 km) from the eye, according to the National Hurricane Center.

The Category 5 hurricane had sustained winds of 185 mph (298 km/h) when it made landfall late yesterday and early this morning on the islands of St. Kitts, Barbuda, Anguilla and Guadeloupe. The storm is forecast to unleash heavy rain and powerful winds on the U.S. Virgin Islands later today, according to the National Weather Service.