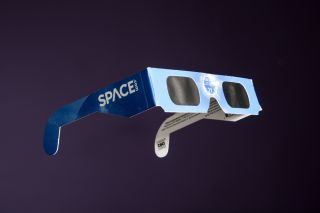 Wear and tear can damage lenses in disposable eclipse glasses, making them unsafe to use.
(Image: © Live Science )

On April 8, 2024, skywatchers will be able to see the moon completely block the sun's light along a path of totality that cuts northward from Mazatlán, Mexico, to Newfoundland, Canada.

So if you purchased solar eclipse glasses for the Aug. 21 event, will they still be good to use in 2024? [Photos: 2017 Great American Solar Eclipse]

"If the filters aren't scratched, punctured or torn, you may reuse them indefinitely," according to a NASA guideline for eclipse-viewing safety. However, new paper glasses produced in accordance with globally recognized optical safety regulations — in effect since 2015 and known as International Organization for Standardization (ISO) 12312-2 — are typically printed with a warning that they should be discarded after three years.

Looking directly at the sun without proper optical protection can cause permanent eye damage, and paper eclipse glasses must display ISO 12312-2 certification to be considered safe for use during an eclipse, the American Astronomical Society (AAS) reported.

Punctures, scrapes and scratches that might allow light to leak through the lenses render eclipse glasses unsafe, according to the AAS. Over time, normal wear as well as environmental factors can make the lenses in paper eclipse glasses more prone to tearing or coming loose, meaning they may not adequately protect your eyes, John Jerit, president of American Paper Optics (APO) — one of the leading manufacturers of ISO 12312-2-compliant eclipse glasses — told Live Science.

And it's impossible to say for sure how well an individual pair of paper glasses is going to hold up over seven years, he added.

"You can't control how people are going to store them," he explained. "If someone calls me in six years and says, 'Are my glasses still good?' I'm not going to say, 'Send me a picture of your glasses.' I'd say, 'Buy new glasses,' under all conditions, every single time," Jerit said.

Compliance with ISO certification requires manufacturers to include an obsolescence date alongside the official ISO logo, Jerit told Live Science. For this reason, APO — which has produced eclipse glasses for 25 years — includes a printed recommendation on its glasses to use them for no more than three years.

But even though you should probably replace your current glasses for eclipse viewing in 2024, that doesn't mean you should just throw out the ones you have. The organization Astronomers Without Borders is accepting donations of undamaged eclipse glasses to distribute to schools in Asia and South America for a solar eclipse that will cross those continents two years from now, in 2019.

You can also just keep using your glasses to observe the sun, because even when there's no eclipse to see, the unobstructed sun is fascinating to look at, said Emily Rice, an associate professor of astronomy at the City University of New York, College of Staten Island. [Sun Storms: Incredible Photos of Solar Flares]

"The easiest thing to see is going to be sunspots," Rice told Live Science.

These are dark patches on the sun's surface triggered by powerful magnetic activity, and they wax and wane in frequency over an 11-year cycle. The sun is now at a point in its cycle where sunspot appearances are decreasing — a trend that will continue until 2020 — but those spots that are visible can be bigger than the Earth, Rice explained.

"That's a really nice way to put the size of the sun to scale when you're actually looking at it with your own eyes," she said.

To find a sunspot, you can visit the website Spaceweather.com to view a daily high-resolution image of the sun and pinpoint sunspots on the star's surface. Then, you can look directly at the sun through eclipse glasses to locate the spots and track their movements over time, Rice said.

"Watching the sun from day to day, those sunspots are going to move slightly but perceptibly. You can learn to recognize sunspots, watch them move across sun — you can see sun's rotation with your own eyes pretty easily," she said.

During sunrise and sunset, the shape and color of the sun are more distorted by Earth's atmosphere. Looking at the sun through eclipse glasses could offer a more detailed view of how the sun is flattened by its proximity to the horizon, and how its colors are affected by scattered light, Rice told Live Science.

Using eclipse glasses to look at the sun when it's high overhead will provide the clearest view, with less atmospheric distortion. At the same time, the sunlight when the sun is at midday strength will also be more intense, so observers should exercise caution even when using protective eyewear, Rice said.

"Be careful not to look for too long. You never want to stare at it, even with eclipse glasses, for more than just a few seconds at a time. High overhead is usually going to be better viewing, but it'll also be more dangerous viewing — it's still the sun," she added.

The sense of wonder that accompanies the unusual sight of a total solar eclipse is a unique experience. But a little of that wonder can be recaptured by directly observing the daily activity of our closest star as Earth travels around it, Rice said.

"I love looking at the sun and thinking — that's a star that's 93 million miles [150 million kilometers] away. I'm on a rock that's orbiting it. Especially at sunset, when my position on that rock is turning away from the sun, you can almost feel the motion and feel your place in the universe," Rice said.

"I think that's a really cool thing about being able to look at the sun safely every day —you can feel something much bigger than what might be immediately around you," she added.