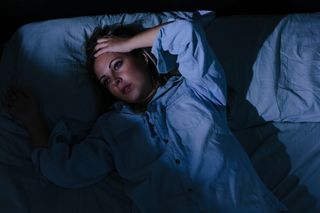 Consider it another strike against not getting enough sleep: A new study finds that getting too little REM sleep may be linked to a higher risk of dementia later in life.

REM, or "rapid eye movement," sleep is one of four sleep stages, which also include two stages of light sleep and a stage of deeper sleep called slow-wave sleep. REM sleep is characterized by vivid dreams and high levels of brain activity, similar to the brain's state when its awake. Humans typically cycle through several periods of REM sleep between the other stages of sleep each night.

In the new study, published today (Aug. 23) in the journal Neurology, researchers found that the people who developed dementia had gotten significantly less REM sleep when examined overnight years earlier compared with the people who didn't develop cognitive problems. [Get Better Sleep in 2017]

The study does not prove that low levels of REM sleep cause dementia; rather, it shows an association between the two, said lead study author Matthew Pase, a senior research fellow at Swinburne University of Technology in Australia.

Pase offered several ideas for how REM sleep and dementia might be linked.

"On one hand, REM may help protect connections within the brain that are vulnerable to damage with aging and Alzheimer's disease," Pase told Live Science. "On the other hand, perhaps lower REM is caused by other potential dementia risk factors, such as heightened anxiety and stress. This requires further study."

Doctors have long known that poor sleep can result in mental and emotional health problems. But details about which types of sleep are associated with dementia and long-term cognitive decline have been lacking. More than 10 percent of Americans over age 65 have some form of dementia, according to the Centers for Disease Control and Prevention.

In the new study, the researchers looked at more than 320 people in the U.S. whose average age was 67. These people were already part of an ongoing, larger study on heart health. The researchers collected sleep data approximately half way through the as they followed the participants for an average of 12 years. During that time, 32 people (about 10 percent) were diagnosed with some form of dementia; among those 32 people, 24 were diagnosed with Alzheimer's disease.

The people who developed dementia spent an average of 17 percent of their sleep time in REM sleep, compared with 20 percent for those who did not develop dementia. The researchers found that for every 1-percent reduction in REM sleep, there was a 9-percent increase in the risk of dementia. The results held up even after the researchers adjusted for other factors that could affect dementia risk or poor sleep, such as heart disease, depression and medication use.

Also, the time that the people spent in stages of non-REM sleep was not associated with dementia risk, the study found. [5 Surprising Sleep Discoveries]

"The study is valuable, since it has identified inadequate REM sleep as correlating with dementia risk," said Dr. Pinky Agarwal, a neurologist at EvergreenHealth in Washington and a professor of neurology at the University of Washington. Agarwal was not part of the study.

"The current [scientific] literature is mixed and mostly identifies inadequate 'slow wave sleep' [a type of deep, non-REM sleep] as a risk, but these have been much shorter-duration studies," Agarwal told Live Science. Because REM sleep is thought to be related to how the brain processes and retains memories, the new findings make sense, she said; dementia is, in part, marked by memory problems. The research points to the need for closer follow-up to recognize signs of dementia in patients with decreased REM sleep, she added.

Indeed, Pase noted that his research group would like to understand why a lower amount of REM sleep is tied to an increased risk of dementia. He hopes to tap into a larger sample of data to examine the relationship between sleep and signs of accelerated brain aging, such as poor thinking, memory problems and loss of brain volume.

This further research might provide more information about how getting less REM sleep, or even poor sleep in general, could lead to the development of dementia, Pase said.