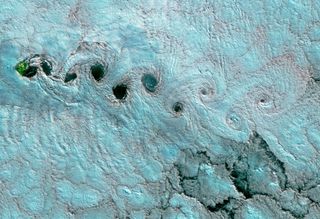 This false-color image, captured on June 25, 2017, by an instrument aboard the Landsat-8 satellite, shows a cloud phenomenon called von Kármán vortices above the South Atlantic.
(Image: © NASA Earth Observatory)

Rotating winds paint the sky with a series of cotton-candy spirals in a new satellite image over the South Atlantic.

The spirals are properly known as von Kármán vortices, according to NASA's Earth Observatory, which released the stunning satellite shot this week. The mechanism that creates clouds like these is fairly simple. Wind moving at just the right speed flows into a blunt object — in this case, the island of Tristan da Cunha — and separates into two distinct flows, which rotate in opposite directions. The rotating air sculpts water vapor in the air into a line of spirals.

NASA's Landsat-8 satellite captured this false-color image on June 25, 2017, using its Operational Land Imager instrument. The candy color of the clouds is artificial, better to differentiate cloud from sea in the image.

A month earlier, the Suomi NPP satellite captured a similar view in an entirely different spot. A second image released by NASA's Earth Observatory shows von Kármán vortices in their true color. In this image, taken May 24, vortices twirl away from Guadalupe Island off the coast of Baja California, Mexico.

The vortices are a frequent subject of satellite glamor shots. In May 2016, a satellite captured an image of the cloud swirls created by wind hitting Mawson Peak on Heard Island in the Indian Ocean. In 2012, the vortices popped up behind St. Helena, a volcanic island in the South Pacific. They even made another appearance by Guadalupe Island that year, accompanied by a double rainbow.

Wind and land often combine to create impressive cloud formations. Coastal breezes can cause low, tube-shaped clouds called "roll clouds," which are almost always associated with thunderstorm downdrafts above dry land. Some wind patterns create not spirals on the lee side of islands, but stripes. These so-called "gravity waves" look like ripples in the sky.

Tristan da Cuhna is known as the most remote inhabited island on the planet. ("Inhabited" is a limited term — fewer than 300 people call the island home.) St. Helena, that other vortice-generating island, is the closest land mass, 1,510 miles (2,430 kilometers) away, according to tristandacunha.org. The island's closest land mass that could not itself be described as "remote" is South Africa, 1,750 miles (2,816 km) away.