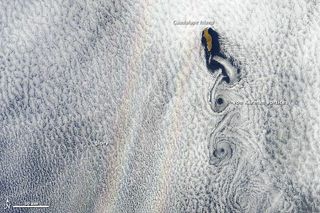 NASA's Aqua satellite caught an arresting image of a rainbow-like optical phenomenon called a glory over the Pacific Ocean on June 20.

The phenomenon is caused by light scattered backward toward the viewer by individual water droplets, producing an oscillating pattern of colors ranging from blue to green to red to purple and back to blue again.

From the ground or an airplane, glories appear as circular rings of color. In the satellite image, the lines of color appear straight against a backdrop of stratocumulus clouds. That's because the satellite takes pictures perpendicular to its path, producing images of horizontal cross sections of the glory rings.

Although glories look similar to rainbows, the way light is scattered to produce them is slightly different; Rainbows are formed by refraction and reflection, whereas glories are formed by backward diffraction. When light is refracted, it is bent by passing through mediums of different densities, such as water or a prism. Reflected light bounces off a surface at an angle equal to the angle it hit the surface at. Diffraction, though, involves light waves being scattered into a ring-like pattern.

Glories always appear around the spot directly opposite the sun, from the viewer's perspective, a spot called the anti-solar point.

In the right of this image is another atmospheric spectacle: a row of so-called von karman vortices, caused by the Pacific island of Guadalupe disrupting the southern flow of clouds, like the wake of a ship.