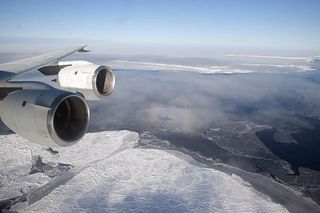 A glory over the Brunt Ice Shelf.
(Image: © Michael Studinger)

Often when flying above a uniform cloud bank, you can look out the window and catch a glimpse of what is called a glory a rainbow created by the scattering of light by water droplets and ice crystals in the air.

In this image, taken Oct. 26 over Antarctica's Brunt Ice Shelf, a glory surrounds the shadow of the DC-8 plane that is flying NASA's IceBridge mission to survey the state of Antarctic ice. The image was taken during the first flight of Icebridge's fall 2010 campaign.

A glory is an optical phenomenon which appears much like a saint's halo about the head of the observer, is produced by a combination of diffraction, reflection and refraction by a cloud of uniformly-sized water droplets. Diffraction is what occurs when a wave of light encounters an obstacle and is bent, and refraction is the change in the direction of a wave, due to a change in that wave's speed, usually as it passes through a medium, such as water or a crystal. Reflection is the return of a wave after striking a surface.

Glories are much smaller than the typical rainbows that stretch across the sky. The size of a glory depends on the size of the droplets that create it.

In order for a glory to be seen, the observer must be directly between the sun and cloud of refracting water droplets, which is why it is commonly seen while airborne, with the glory surrounding the airplane's shadow on clouds, as in this image. The phenomenon is related to the optical phenomenon parhelia, which is also known as a sundog.

A sundog is a pair of brightly colored spots, one on either side of the sun. Sundogs form as sunlight is refracted by hexagonal plate-like ice crystals.

The Icebridge campaign, a six year mission designed to study Antarctica for its potential impact on global sea level through melting ice. Each year, the NASA researchers associated with the mission re-visits certain features in order to monitor the changes in ice shelves and outlet glaciers.