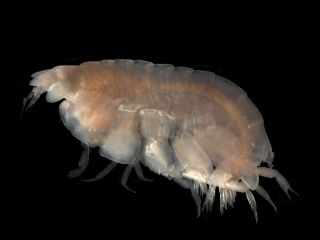 Though small, amphipods such as Lepidepecreum longicornis can pack quite a bite.
(Image: © Copyright Hans Hillewaert)

Tiny marine creatures — each measuring a fraction of an inch in length — gnawed a teenager's legs bloody during a seaside dip in Melbourne, Australia, and experts identified a type of scavenging crustacean as the culprit in this exceedingly rare encounter.

On Saturday (Aug. 5), 16-year-old Sam Kanizay emerged from the water at Melbourne's Brighton Beach to find blood pouring down his shins and ankles from what appeared to be hundreds of needle-like punctures, the teen's father, Jarrod Kanizay, told the BBC.

"It wasn't clotting at all. It just kept bleeding and bleeding," he said.

Kanizay later returned to the beach to capture some of the tiny animals that had bitten his son for identification purposes, the BBC reported. Genefor Walker-Smith, a marine biologist with the Museums Victoria in Melbourne, examined the creatures that Kanizay collected, and identified the mystery chewers as amphipods­ — a type of minuscule shrimp-like crustacean — in the Lysianssidae family. Walker-Smith described them yesterday (Aug. 7) in a Facebook post, saying they "have no venomous properties and will not cause lasting damage." [In Images: The Menagerie of Seussian Creatures Under the Sea]

The teen had been standing in chilly waist-high water for about 30 minutes, unaware that masses of sea fleas were biting him, he told the BBC. Though he felt a prickling sensation on his legs at the time, he thought that was due to the cold, he said. Once he was out of the water, he brushed away what he thought were grains of sand on his legs, only then discovering that he had been covered in tiny, biting animals, the BBC reported.

Anticoagulants produced by the amphipods could account for the copious bleeding he experienced after the biters were removed, Walker-Smith said on Facebook. Currently, none of the lysianssid amphipods are known to produce an anticoagulant — but then, no one's yet investigated that adaptation in the group, Les Watling, a professor with the Darling Marine Center at the University of Maine, told Live Science in an email.

"If an anticoagulant is present, it would be because the amphipods were preying on or parasitizing fish," he said.

While doctors at a local hospital were attending to the boy's wounds, his father donned a wetsuit and returned to the bay with a pool net, snaring "thousands" of the amphipods, he told Australian news website The Age. Footage that he shot of his "catch," uploaded to YouTube on Sunday (Aug. 6), shows a dish of water teeming with amphipods as they darted around and devoured several pieces of raw meat.

Lysianssid amphipods — also known as "sea fleas" — vary greatly in size, from as small as a few millimeters to as large as 8 inches (20 centimeters) in length, with the largest found in the deep sea, and the smallest living mostly in the tropics, Watling said.

Amphipods in this group are mostly scavengers, playing an important part in marine food webs by eating dead and decaying plants and animals. However, some amphipods are active predators, and though tiny, they would certainly be capable of piercing human flesh with their mandibles, Watling explained.

"The mouthparts, especially the mandibles, have wide, sharp, blades designed for cutting animal tissue. These shallow-water species may also feed on algae, but they mostly are likely feeding on other animals living in the algae," he told Live Science.​

The marks on the teen's legs were certainly small enough to have been made by amphipods, and their patterns suggest how the amphipods may have been feeding, Watling said.

"Several [of the marks] look like they are in irregular 'trails,' suggesting the amphipod was biting the surface and moving along to get another bite, rather than biting deeply and digging in," he said.

Sam Kanizay may have disturbed a feeding group of amphipods when he stepped into the water. And the longer he stood still, the more of them followed the blood trail to the feeding frenzy — but amphipods typically don't launch piranha-like attacks against people, Walker-Smith said on Facebook.

"I do wonder if he had scratches or something that would have attracted the amphipods," Watling said.

"But they might have just determined him to be 'fish' and decided to have dinner," he added. ​