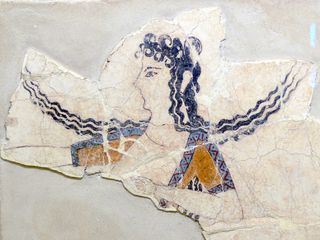 The Minoans and Mycenaeans were the first advanced, literate civilizations to appear in Europe. They left archaeologists with a wealth of material to pore over: palaces, golden jewelry, wall paintings, writing (some of it still undeciphered) and, of course, burials, in what is today Greece.

Now, new research on Bronze Age skeletons could shed light on the origins of the Minoan and Mycenaean people.

The study of ancient DNA suggests that there is genetic continuity between the predecessors of these ancient cultures and Greeks today. The Minoan and Mycenaean civilizations emerged from Aegean farming communities and gave rise to the Greeks who built the Parthenon and developed democracy. The findings, which were published online today (Aug. 2) in the journal Nature, also raise some questions about prehistoric migrations that set the stage for the Bronze Age. [7 Bizarre Ancient Cultures That History Forgot]

The Minoans and Mycenaeans have intrigued archaeologists from the early days of the discipline.

German businessman and archaeology pioneer Heinrich Schliemann set out in the 1870s to find the real-life remains of the heroic-era Homer described in "The Odyssey" and "The Iliad."He uncovered gold-rich tombs in the city of Mycenae, and since then, dozens more Mycenaean sites have been studied across mainland Greece and the Aegean Islands. The civilization, which lasted from about 1600 B.C. to 1100 B.C., produced the earliest written form of the Greek language. [10 Beasts & Dragons: How Reality Made Myth]

Just a few decades after Schliemann's exploits, British archaeologist Sir Arthur Evans revealed the ruins of a monumental, fresco-filled palace on the Greek island of Crete that predated the Mycenaeans. He called this culture "Minoan" after the mythical King Minos who ruled over Crete and occasionally sacrificed young Athenians to the labyrinth-dwelling half-man, half-bull Minotaur. The Minoans thrived on the island between 2700 B.C. and the mid-1400s B.C., when the Thera volcanic eruption on Santorini in the southern Aegean Sea may have triggered the culture’s collapse. Minoan script and hieroglyphs remain untranslated, but the language is thought to be very different from Greek.

Because of some iconographic similarities with Egyptian art, Evans thought that the Minoans might have come from North Africa. In the century that followed, others proposed theories about how the Minoans and the Mycenaeans came about, wondering how much these cultures owed to other great civilizations in Mesopotamia and Egypt, said study leader Iosif Lazaridis, a geneticist at Harvard Medical School. "These theories have been difficult to test, but with ancient DNA, it is possible to say something about the origins of the people," Lazaridis told Live Science.

Lazaridis and his colleagues looked at ancient DNA samples from 19 sets of human remains that had been found at Bronze Age tombs and burial sites in the Aegeanregion. The researchers sequenced those ancient genomes and checked the DNA against a database of 332 other ancient genomes and thousands of genomes of present-day humans.

Genetically, the Minoans and Mycenaeans had the most in common with early Neolithic farmers from Greece and Turkey, the researchers found. The genomes of the Minoans and the Mycenaeans were also similar to those of modern Greek populations and to each other — for the most part.

The study found that the Minoans and Mycenaeans got some of their DNA from populations farther east, from places like the Caucasus (the area between the Black Sea and the Caspian Sea) and Iran. However, only the Mycenaeans seemed to have some "northern" ancestry, which the authors speculate could represent the vestiges of a massive prehistoric migration of nomadic herders from the Eurasian steppe that eventually made it to mainland Greece but not Crete. Lazaridis was involved in a previous ancient-DNA study that pointed to such a migration as the potential source of Indo-European languages (a category that includes Greek).

John Bintliff, an archaeologist at Leiden University in the Netherlands who was not involved in the study, said some of the findings resonate with current ideas on the Minoans and Mycenaeans. For example, the fact that the Mycenaeans spoke Greek but the Minoans spoke a different, still untranslated tongue "has long suggested that the mainland and Crete were subjected to different streams of farming migrants," Bintliff told Live Science.

However, Bintliff cautioned against looking for big historic events in gene diffusion.

"The supposed 'nomad invasion' has been a long-researched issue in European prehistory, and was originally tied to innovations in weaponry and burial customs," Bintliff said. "After decades of investigation, however, most prehistorians in Eastern to Western Europe disagreed with any major arrival of new people …Gene flow can occur presumably through individual smaller-scale migration of a peaceful kind, through commerce and the movement of artisans and other specialists."

Lazaridis said further research could potentially help scientists understand how these "eastern" and "northern" types of ancestry got in the DNA of Bronze Age Greeks, whether by trickling in slowly from neighboring regions over thousands of years, or bysudden big migrations.