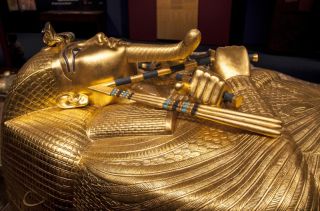 King Tutankhamun, the pharaoh who ruled Egypt more than 3,300 years ago, slept on the forerunner of our modern camping bed, according to a study presented at the latest international conference on the boy king in Cairo.

The piece of furniture was smaller and sat lower to the ground than the other five regular beds found in the burial chamber of King Tut. Nevertheless, it featured a remarkable level of comfort, boasting a rather elegant design as well as a sophisticated technology, researchers have now found in the first study of the bed. [In Photos: The Life and Death of King Tut]

Indeed, the bed folded up into a Z shape, thanks to an ingenious mechanism, the study showed.

"No detailed study has been made of this bed since Carter sketched it almost a hundred years ago," architect Naoko Nishimoto, who researches ancient furniture and woodworking at Musashino University in Tokyo, told Live Science.

"This is the only real-size camping bed that has ever been found. No other pharaohs but King Tut had such [a] bed. It is intriguing," she added.

A model of a two-fold bed from Gebelein, in Egypt, that measures about 5 inches by 12 inches (13 by 30 centimeters) and dates to the 18th Dynasty, suggests that two-fold beds may have existed or at least were being designed before King Tut's camping bed came to be.

But the boy king's three-fold bed was revolutionary, the researchers said, adding that it was steadier, more comfortable and much more compact to carry than the two-folds.

"Traces of trials and errors tell us that the artisans involved in the bed production did not have any other three-fold beds for reference. The camping bed was made especially for King Tut," Nishimoto said.

Her investigations into the technical features of the folding bed revealed a unique interplay of form and function. [7 Amazing Archaeological Discoveries from Egypt]

"The result was a comfortable hybrid system made of a wooden frame, bronze hinges and a weaving mat," Nishimoto said.

The bed features four wooden "lion" legs (with paws) that rest upon copper-alloy drums and would have supported the weight of a person.

However, given the elaborate shape of the legs, folding up the bed was tricky. To solve the problem, the ancient artisans devised some ingenious hinges and placed them over the four auxiliary legs.

“In this way, the legs took the strain off the hinges," when the bed was in use, Nishimoto said.

The complex folding system required two different types of hinges: Single hinges with stoppers were used on the middle and end pairs of legs near the footboard, while a system of double hinges was designed for the foremost pair of the auxiliary legs.

"The double-hinged legs could be turned inwards simultaneously when the bed was folded," Nishimoto said.

Stretching across the frame from end to end, a mat was woven with a set of three thin-cut strings of linen.

Holes can still be seen around the double hinges. "They were made with the intention to pass strings through them, but they were not used after all," Nishimoto said.

Indeed, the bed could not be folded if the strings were passed through those holes.

"This trial-and-error process clearly shows that this three-fold bed was the first ever made," Nishimoto said.

The bed not only reveals the high level of craftsmanship of the ancient Egyptian artisans, but it also provides an insight into the aspirations of the young Tutankhamun, according to Nishimoto.

"Even though the frail young king may never have participated in long-distance or strenuous expeditions, he nevertheless loved the idea of hunting and camping," Nishimoto said. (Research has suggested the boy king suffered from malaria and had a club foot, requring him to use a cane.)

"His camping bed is inherently poetic," she added.