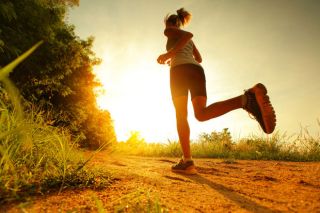 From jogging to weightlifting, physical activity is good for you, in part because it helps your body fight inflammation. Now, a new review explains exactly how exercise works to lower inflammation.

Inflammation is the body's way of healing itself after an injury and protecting itself from infection; but chronic inflammation is linked with all kinds of diseases, from diabetes to heart disease. When you start exercising and moving your muscles, your muscle cells release a small protein called Interleukin 6, or IL-6, which appears to play an important role in fighting inflammation. IL-6 has several anti-inflammatory effects, including:

The biggest factor in determining how much IL-6 your muscles release is the length of your workout — the longer your workout, the more IL-6 is released, according to the review of relevant research. For example, after a 30-minute workout, IL-6 levels may increase fivefold, but after a marathon, the levels may increase by a factor of 100, according to the review. IL-6 levels peak around the time you finish a workout, and then rapidly decrease back to pre-exercise levels. [4 Easy Ways to Get More Exercise]

A study published in 2003, and part of the new review, explored the role of IL-6 in reducing inflammation. In that study, the researchers injected participants with a molecule from E. coli bacteria that is known to activate the body's inflammatory response. The researchers found that, indeed, when they injected this molecule, there was a two- to threefold increase in levels of the inflammation-triggering protein TNF alpha. But if participants engaged in 3 hours of stationary cycling before the injection, they experienced an increase in their IL-6 levels, and they did not see a similar rise in TNF alpha.

The review concludes that exercise should be used as part of the treatment for chronic diseases involving inflammation.

"Physical activity represents a natural, strong anti-inﬂammatory and metabolism-improving strategy with minor side effects, and should be integrated in the management of patients with chronic diseases," such as type 2 diabetes and cardiovascular disease, the review said.

The review was published July 19 in the European Journal of Clinical Investigation.