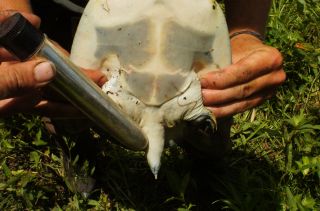 And while there were varying degrees of success between the species, the researchers reported in a new study that plenty of the turtle males obligingly rose to the occasion. [The 9 Weirdest Animal Penises]

In some turtle species, it can be difficult to tell the sexes apart just by looking at them. Either the males and females aren't very different in size or body shape, or the individual turtles exhibit secondary sex traits that belong to both males and females, the study authors reported.

And traditional methods for distinguishing turtle sexes — such as sampling blood for sex hormone analysis, minor surgery, or camera insertion into their genital areas — are time-consuming and invasive, and tricky to perform outside of a laboratory's controlled environment, study lead author Donald McKnight, a doctoral candidate with the College of Marine and Environmental Sciences at James Cook University in Australia, told Live Science in an email.

"Although this is an admittedly comical method, it does actually have scientific merit because it is less invasive for the animals and easier and cheaper for the researchers," McKnight said.

This isn't the first time that scientists have experimented with stimulating male turtles to tell the sexes apart. Earlier efforts found that Cotinga River toadhead turtles (Phrynops tuberosus) would become erect if their limbs and neck were immobilized, while common snapping turtles (Chelydra serpentina) would show their penises if they were gently bounced up and down, the study authors wrote.

And a prior study used vibrators on male turtles to make them ejaculate, which suggested that vibrators could shake things up for field researchers trying to induce turtle erections.

Spiny softshell turtles appeared to enjoy having their tails stimulated, frequently wagging them "from side to side," the study authors reported. Meanwhile, Mississippi mud turtles and musk turtles were most responsive to "slow, small circles" on their abdominal and pectoral regions. Western chicken turtles also enjoyed the circular movements, but higher up on their pectorals, according to the researchers.

In other words: Different folks need different strokes. Even when those folks are turtles.

The findings were published online in the June 2017 issue of the journal Acta Herpetologica.