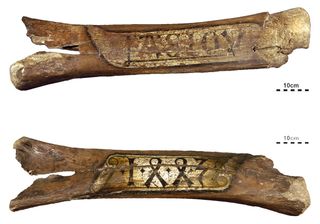 To wander the halls of a natural history museum today is to be transported back into the age of giants: giant dinosaurs, giant mammoths, giant sloths.

In the past, when people stumbled across similar fossils eroding out of hillsides and scattering the floors of caves, they too saw giants. But in many cases, up until the 17th century, observers imagined those giants to be people (or mythical creatures).

Scientists have now rounded up cases around the world, particularly in Europe, in which some "giant" bones were kept in churches as artifacts of the world before the biblical flood. Researchers already knew about some of these paleontological inspirations for myths and legend, but the new research, published June 26 in the journal Historical Biology, is one of the most in-depth looks at the phenomenon yet.

Among the paleontological tales are cases of elephant skulls mistaken for cyclops remains in the Mediterranean and a swordfish bone believed to be a dragon's tongue cut out as a trophy by a triumphant giant. [Top 10 Beasts & Dragons: How Reality Made Myth]

Study researcher Marco Romano, a postdoctoral researcher at the Museum of Natural History in Berlin, said he became interested in gathering these tales while reading texts on 14th- through 19th-century ideas about the Great Flood. This is the biblical tale of the inundation of the entire world, said to have wiped out all life but those aboard Noah's famous ark.

After reading several claims by ancient authors who said they'd personally observed the bones of giants dug from the ground, Romano got together with Marco Avanzini, a researcher at the Science Museum in Trento, Italy, to search for more such texts.

Romano had a personal connection to the work, too. His mother is from Sardinia, Italy, and his grandfather used to walk Romano along the cliffsides of the island and tell him tales of the cyclops bones found in caves there. These stories were based in history. Shepherds really did find bones on the islands of Sardinia and Sicily that looked like giant skulls with single eye openings. It wasn't until 1688 that a scientist named Giovanni Giustino Ciampini showed that the skulls came from an extinct dwarf-elephant species, not from a one-eyed giant called cyclops. [10 Extinct Giants That Once Roamed North America]

Combing through ancient texts, Romano and Avanzini found reams of examples of fossils used as evidence for an ancient race of human-like giants. These myths go back far: Herodotus, a Greek historian who lived between 484 and 425 B.C., wrote that the giant bones of the mythical giant Pallas and the hero Orestes (who was said to be 10 feet, or 3.3 meters, tall) had been discovered in Rome and Acadia (in Mesopotamia), respectively.

Pliny the Elder, the Roman naturalist who lived between A.D. 23 and 79, wrote of the bones of the mythological giant Orion being discovered in an "opened" mountain on the island of Crete. These discoveries fed into Greco-Roman myths about a race of giant Titans, who were defeated by the pantheon of Greek or Roman gods, as well as about the mind-boggling size and strength of the heroes of Greek and Roman mythology.

Other references to giants appear in the fifth-century book "The City of God," by St. Augustine, which references a giant tooth from Carthage (a city in what is now Tunisa), a human skeleton found in a cave in Trapani (in what is now Italy) that was nearly 300 feet (91 meters) long and 11.5-foot (3.5 m) skeletons seen on a 1615 expedition to Patagonia, South America (a fossil-rich location even today) by Dutch navigator Willem Cornelisz Schouten.

Many unusual bones ended up in the hands of churches and cathedrals, like a thigh bone preserved in the church of Crociferi in Venice, Italy, in the 1700s and a giant tooth said to belong to St. Christopher that was kept in Vercelli, Italy. Most of the actual specimens that these texts describe have been irrevocably lost, Romano said, with one exception: a mammoth leg bone found in Vienna in 1443 during the construction of St. Stephen's Cathedral there. That bone was carved and preserved at the church as a relic of a giant said to have died in the Great Flood. The fossil eventually made its way to the University of Vienna, which houses the bone to this day.

Among the most intriguing tales the researchers found, Romano said, was the myth of the giant Aimon, which dates back to A.D. 1240. Aimon was said to have lived in Wilten, Austria, and killed a dragon that guarded a treasure there. The battle soaked the soil with the dragon's blood, which was said to seep out of the ground in a dark goo (actually, Romano said, the "goo" is a mineral tar found in schist rocks in the region). Aimon was said to have cut the dragon's tongue from its mouth as a trophy, and that "tongue" was kept in the monastery of Wilten.

It turned out to be to be the nose of a swordfish, Ramano said. The myth of the dragon remained strong until at least the 1600s, when the abbot of the monastery ordered excavations to search for Aimon's bones, too.

"The funny part of the story is that excavations did not lead to any discovery, but caused the collapse of the entire church," Romano said. Oops.

Though the researchers focused largely on Italian texts, myths of giants appear the world over, Romano and Avanzini wrote. South and Central American mythologies include stories of giants annihilated by God for their wickedness, the researchers wrote, while Japanese myths tell of enormous demigods who battled dragons.

It's not quite clear whether fossils were the origin of all these myths, Romano said, or if people simply held the bones up as evidence for stories humans had already spun. In the case of the cyclops, Romano said, it's quite likely that the fossils came first and the story followed. In other cases, people may have imagined giants first or drawn inspiration from real-life cases of gigantism in humans caused by genetic disorders. [Cyclops of the Sea: Pictures of a One-Eyed Shark]

By the 17th and 18th centuries, though, advances in anatomy severed the link between fossils and giants, the researchers said. Ciampini conducted his study of the "cyclops" skull in 1688. In 1728, British physician Sir Hans Sloane debunked the giant myth by showing that the bones said to belong to an ancient race of huge humans were really mostly from whales or elephants. In his work, Sloane also presaged the development of comparative anatomy by urging naturalists to examine bones "with greater accuracy" and study how the skeletons of humans, animals and fossils compare in size and shape.