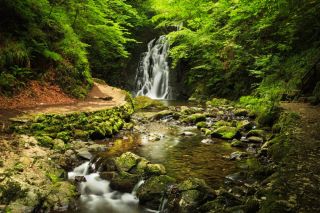 Mid-Ulster in Northern Ireland is home to the highest proportion of people with gigantism than any other place on Earth, scientists say.
(Image: © fujji / Shutterstock.com)

The land of giants. It sounds like something from a fairy tale, but it arguably exists in a region of Northern Ireland where a cluster of people with a genetic predisposition grow abnormally tall.

In Mid-Ulster, about 1 in 150 people carry a genetic mutation to the AIP gene that leads to an overproduction of growth hormone resulting in acromegaly, also known as gigantism. The hormone disorder is spurred by a tumor on the pituitary gland, a pea-sized organ at the base of the brain.

"This is probably the highest proportion of giants in the whole world in that little part of Northern Ireland," Marta Korbonits, professor of endocrinology at Barts and the London School of Medicine Queen Mary, tells Seeker. Korbonits led the team that discovered the link between the AIP gene defect in Irish populations and gigantism in 2011.

In their latest research, Korbonits and her team calculated that the AIP gene defect traces back 2,500 years. The team found the variant in Charles Byrne, a man born in 1761 who grew to be 7 feet, 6 inches tall and was known as the "Irish giant," as well as in 18 other Irish families.

In children, there's rapid growth, which can be accompanied by joint pain, disabling headaches, vision problems, type II diabetes, facial distortion and enlarged hands and feet. In adults, if symptoms develop late, adults don't get taller, because their bones are already fused and may in fact shrink due to developing a curvature in the spine. Other symptoms include muscle weakness, hypertension and difficulty sleeping.

"While these people might look big and powerful and strong, the long-term effects of excess IGF-1 and growth hormone are very disabling for these patients," explains Anthony Heaney, endocrinologist and professor at the David Geffen School of Medicine at the University of California, Los Angeles (UCLA).

"We have this fascination with these really large, powerful people, and yet they themselves have a lot of morbidity and potential mortality from this disorder," Heaney continues.

Treatments are available and include surgery, medication or radiation therapy, but how effective those options are depends largely on the progression of the disease. Usually by the time clinicians get involved, patients have already developed large tumors, and complete control of the tumor and hormone regulation is hard to achieve. Even the best surgical centers in the world are just 50 percent effective at achieving that control, Heaney notes.

Monitoring the lineage of the gene variant lets researchers keep an eye out for children who inherit the defect. Early clinical intervention can help to prevent the worst of the symptoms.

Researchers say it's unlikely there are other hotspots with the same gene defect causing acromegaly.

"Humans have about 30,000 genes, and if you imagine that each gene is a book within a library, we have a library with 30,000 books, Korbonits explains. "The one which we're talking about here is called AIP... and the Irish guys have one particular spelling mistake in this book."

To Heaney, who hails from Northern Ireland, it makes a lot of sense that a cluster of individuals prone to gigantism have been found in Mid-Ulster, not only because of the fame of giants like Bryne, but also the folklore of the region, specifically the myth of giant Fionn mac Cumhaill. The legend goes that mac Cumhaill created the Isle of Man by hurtling a piece of land torn from a lake known today as Loch Neagh and created the Giant's Causeway, an interlocking series of basalt rocks that lead out to the ocean, to the Scottish giant Benandonner.

With researchers looking into the real, genetic heritage that inspired mythological figures and clinicians treating acromegaly, perhaps one day gigantism will only be found in fiction.