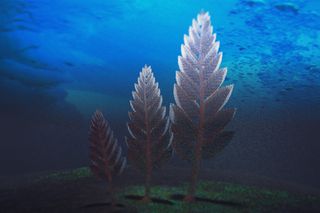 Frond-like rangeomorphs were among the first nonmicroscopic life-forms on Earth. These weird animals could be anywhere from a few centimeters to 2 meters (6.5 feet) tall.
(Image: © Sarah Collins/University of Cambridge )

The bizarre creatures looked more like fern fronds than anything recognizable as an animal. They appeared in the oceans suddenly more than 571 million years ago — about a billion years after the first single-celled eukaryotes (organisms with membrane-bound nuclei) emerged, but 30 million years before a huge diversification of life on Earth, called the Cambrian explosion, occurred. Why these large animals evolved suddenly at that particular time has been a mystery, Jennifer Hoyal Cuthill and Simon Morris of the University of Cambridge said today (July 10) in the journal Nature Ecology and Evolution.

Now, new measurements of these frondy fossils suggest that these animals, called rangeomorphs, were able to adjust their body size in response to changing ocean conditions. This shape-shifting ability may have enabled them to grow very large, very quickly. [Gallery: Weird Images of Ediacaran Creatures]

Rangeomorphs lived during the Ediacaran, which spanned between 635 million and 541 million years ago. They probably filtered nutrients from the water using their leaf-like branches, which were arranged in a symmetrical, fractal pattern. They went extinct around 541 million years ago, at the beginning of the Cambrian, and nothing very much like them survives today. No one really knows for sure how they completed basic life tasks, like eating or reproducing, though they may have done the latter by budding off their frilly fronds into new organisms, research has shown.

Hoyal Cuthill and Morris, both paleobiologists, used computed tomography to scan and measure fossils of one species of rangeomorph, Avalofractus abaculus, found in Australia, the United Kingdom and Newfoundland. They recorded body shapes and sizes, which ranged from a few centimeters to about 2 meters (6.5 feet) in length. Then, they built computer simulations to figure out what environmental variables would lead to those body configurations.

They found that the patterns of body growth in the fossils suggested that the rangeomorphs changed their shape and size depending on the nutrients in the environment. In nutrient-rich waters, for example, the rangeomorphs could maintain the same number of branches but grow larger overall. If the nutrients went from concentrated higher up in the water to less concentrated down below, the animals developed a narrow, tapered body to better capture what they could.

Responding to the ecosystem

The researchers aren't sure which specific nutrients the rangeomorphs may have been responding to, but organic carbon and oxygen levels are strong possibilities, they wrote. The findings are some of the first hints of an idea called "ecophenotypic" plasticity — the ability to change shape and size in response to the ecosystem — in the fossil record, the researchers said.

"During the Ediacaran, there seem to have been major changes in the Earth's oceans, which may have triggered growth, so that life on Earth suddenly starts getting much bigger," Hoyal Cuthill said in a statement.

Other nonmicroscopic life in the Ediacaran included tapeworm-like creatures that burrowed in ocean sediments, and a cup-shaped creature with fronds that also lived on the seafloor — the first animal known to have muscles.