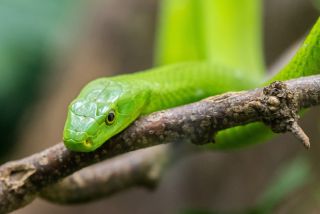 The venom of the green mamba — one the most dangerous snakes in Africa — might one day help to treat people who have a genetic disorder that affects the kidneys, according to a new study conducted in mice.

However, the new study was done in mice, and it is not clear yet if the venom compound may work to treat this disease in people who have the condition, said study author Nicolas Gilles, a venom researcher at the University of Paris-Saclay in France. Further studies are needed to look at this, he said. [5 Wacky Things That Are Good for Your Health]

Treatments that are currently available for polycystic kidney disease may help to alleviate some of its symptoms, such as high blood pressure, but there is currently no cure for the disease, the National Kidney Foundation says.

Green mamba bites may cause dizziness, nausea and irregular heartbeat, and can be fatal. In the new study, the researchers first extracted one compound from the venom, called mambaquaretin-1, according to the study, published today (June 19) in the journal Proceedings of the National Academy of Sciences.

The researchers then administered the venom compound to six mice with the kidney disease every day for 99 days. The study also included a group of control mice with the condition, which were instead given saline solution every day for 99 days. The mice that were given the compound seemed to tolerate it well, as the animals did not change their behavior during the experiment, the researchers said.

The number of cysts in the mice treated with the compound was reduced by one-third, the researchers found. The researchers also found that the ratio of cyst area to normal kidney tissue area decreased by 28 percent in the mice treated with the compound. Moreover, the total area of kidney cysts was reduced by 47 percent after the treatment, the scientists found. [Pick Your Poison: 7 Ways Venom Can Be Healing]

The compound seems to work by targeting the action of a receptor called the type-2 vasopressin receptor, which is involved in the disease, the researchers said.

So far, researchers have not looked at using venom from this snake to treat any other condition, Gilles told Live Science. However, based on this and other research, it is becoming more and more clear that, besides being rich in toxins, venoms are also a source of molecules that can target certain receptors in the body that are involved in human health, he said.