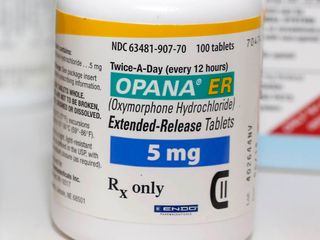 The U.S. Food and Drug Administration (FDA) announced today (June 8) that it has requested that Endo Pharmaceuticals, a drug company, remove the opioid painkiller Opana ER from the drug market.

This is the first time that the federal agency has requested that a drug company voluntarily stop selling a medication because of the risk of abuse that the drug carries, the FDA said in a statement. If the company does not choose to do so voluntarily, the FDA will force the issue by withdrawing its approval for the drug.

The request was made after the FDA determined that injecting the drug, which is one way of abusing it, was linked to outbreaks of disease, including HIV and hepatitis C. [America's Opioid-Use Epidemic: 5 Startling Facts]

"The abuse and manipulation of reformulated Opana ER by injection has resulted in a serious disease outbreak," Dr. Janet Woodcock, the director of the FDA's Center for Drug Evaluation and Research, said in a statement.

In March, an advisory committee of independent experts voted 18 to eight that the benefits of the drug no longer outweighed its risks.

"When we determined that the product had dangerous and unintended consequences, we made a decision to request its withdrawal from the market," Woodcock said. "This action will protect the public from further potential for misuse and abuse of this product."

Opana ER (oxymorphone hydrochloride) was first approved by the FDA in 2006 for use by people with moderate or severe chronic pain. The extended-release formulation of the medication allowed for a continuous release of the drug into the body.

The drug was reformulated in 2012 in an attempt to make the medication more difficult for people to abuse; specifically, the drug makers sought to make it difficult for users to snort or inject the drug. Although the reformulated drug was approved, the FDA later determined that this change did not "meaningfully reduce abuse." The agency said that it would not allow the company to label the drug with language describing its potentially abuse-deterring properties, the statement said.

An FDA review of available data on the drug found that the way people abuse the medication had shifted significantly after its reformulation, changing from snorting to injection. The increase in injection of Opana ER has been linked to outbreaks of HIV and hepatitis C, two viruses that can be transmitted through syringes. There have also been cases of a serious blood disorder called thrombotic microangiogpathy linked to the abuse of the drug.

The FDA has previously requested that companies remove opioid painkillers from the market; however, in those cases it was not because of the risk of abuse that the drug carried. In 2010, for example, the FDA recommended that drug companies stop selling the opioid pain reliever propoxyphene, but this was done because the agency determined that the drug was dangerous for heart health.

In addition, the FDA said it will continue to look at the risks versus the benefits of all other opioid painkillers on the market and take further action if needed.

"We are facing an opioid epidemic — a public health crisis, and we must take all necessary steps to reduce the scope of opioid misuse and abuse," FDA commissioner Dr. Scott Gottlieb said in the statement. "We will continue to take regulatory steps when we see situations where an opioid product's risks outweigh its benefits, not only for its intended patient population but also in regard to its potential for misuse and abuse."