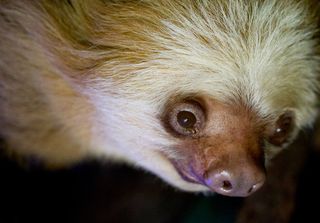 The world's oldest known sloth has died at 43 years of age.

Officials at the Adelaide Zoo in Australia announced that they had to euthanize a Hoffmann's two-toed sloth known as Miss C on Friday (June 2). Her quality of life had "deteriorated due to age-related health issues," zoo officials said. The sloth had reached more than double her life expectancy.

"Miss C truly was a phenomenal creature and believed to be the oldest of her kind in the world," Adelaide Zoo curator Phil Ainsley said in a statement. "The treatment Miss C required was very invasive and would likely only delay the inevitable, so the hard decision was made to humanely euthanize her."

Miss C— who was born at in the Adelaide Zoo in 1974, far from her native home in the Americas — was also the last of her kind in Australia. [Daring Duos: Photos of Unlikely Animal Friends]

"At this stage, there are no sloths left in the region, so while we would love to one day house this amazing species again, it may be some time before a sloth once again calls Adelaide Zoo, or Australia home," Ainsley said.

In the wild, the Hoffmann's two-toed sloth (Choloepus hoffmanni) lives in humid tropical forests and cloud forests in Central and South America. The solitary species is nocturnal and moves at a painfully slow and deliberate pace. On any given day, one of these animals might sleep for up to 15 hours and move a total of only 125 feet (38 meters). According to National Geographic, the creature is so sedentary that algae manages to grow on its brown-colored coat. (This has the side effect of providing some nice camouflage against predators and ocelots.)

These sloths do everything in trees: not just eating leaves and fruit, but also sleeping, mating, giving birth and pooping. The animals are so habituated to an arboreal, upside-down life that their hair grows in the opposite direction (upward) from that of most mammals, according to the San Diego Zoo. And the creatures' two climbing claws, which can grow to 4 inches (10 centimeters), are so strong that a sloth might remain hanging from a branch even after death.

The International Union for Conservation of Nature and Natural Resources (IUCN) lists the Hoffmann's two-toed sloth as a species of least concern, meaning the animals are not in danger of going extinct anytime soon. The wild population faces some threats, however, including habitat loss and the illegal trade, according to the IUCN.