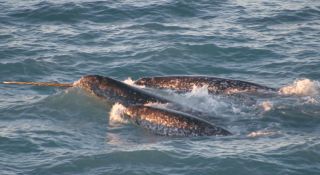 Given the helical, horn-like tusks protruding from the front of narwhals' heads, it's no wonder why the whales are dubbed the "unicorns of the sea." And these Arctic-loving animals are just as mysterious as their mythical counterparts, especially when it comes to their mating behaviors.

Narwhals (Monodon monoceros) are medium-sized whales that are closely related to the beluga whale, which is part of the same taxonomic family. The whales spend their lives in the Arctic waters of Canada, Greenland, Norway and Russia.

"Narwhals are highly migratory and this migration is closely linked to the formation of the sea ice," says narwhal researcher Kristin Laidre of the Polar Science Center at the University of Washington. "Their summering grounds become frozen over in autumn, so they make a long migration to offshore areas where they spend the winter." [Drone Footage Solves Mystery Purpose of Narwhal’s ‘Unicorn’ Tusk | Video]

The cetaceans mate at these wintering grounds some 200 miles (322 km) offshore. But the finer details of what goes on during this mating season are largely unknown due to the difficulties of observing the animals in their natural habitat, which is covered in dense ice that has just a few percent of open water, Laidre told Live Science.

Female narwhals reach sexual maturity around 8 or 9 years old while males begin mating anywhere between 12 and 17 years old. It's unclear how exactly the whales attract mates or what's involved in sexual selection or courtship.

Unlike large baleen whales, narwhals don't produce songs. They do use echolocation — which recent research shows the whales can focus into a highly precise beam, Laidre said — and make a range of whistles, clicks, grunts and squeaks, which vary between seasons. But researchers have yet to identify any noises specific to mating or courtship, she added.

Comparatively, males' conspicuous tusks appear to be involved in breeding. These tusks, which protrude 6.7 to 9.8 feet (2 to 3 meters) out of the upper jaw, are very rarely found on females, and some males grow two tusks. In 2014, scientists discovered that males with longer tusks have more massive testes, suggesting the appendages help males attract mates. "The tusk is an indicator of fitness as a mate," Laidre said, adding that scientists haven't been able to genetically show that males with longer tusks are more reproductively successful because it's difficult to biopsy (take a tissue sample) from a free-ranging narwhal.

During the summer months, researchers have observed male narwhals touching and crossing tusks (though not necessarily in an aggressive manner) while making somber-sounding whistles, often times with a female between them. This behavior suggests the tusks may also be involved in establishing dominance hierarchies.

Virtually nothing is known about how copulation occurs or how long it lasts because it's never been observed, Laidre said. But scientists know that female narwhals have a 14-month gestation period and give birth to a single calf about every 3 years.

The oldest-known narwhal is over 100 years old and female narwhals are likely reproductively active for most of that time — researchers estimate the whales stop breeding at around 70 years old.