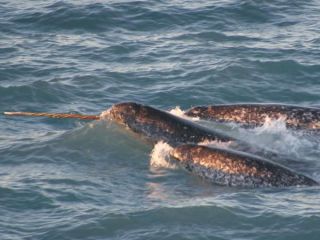 A pod of narwhals off northern Canada in August 2005.
(Image: © NOAA/Kristin Laidre)

Arctic whales whose long, spiraled tusks [image] created the myth of the unicorn seem to call out with individual voices, according to a new study.

Researchers think the vocalizations help narwhals to recognize each other or reunite with distant pods, just as our relatives can identify us over the phone, for instance [Listen to the narwhal calls].

Scientists have known that marine mammals rely on acoustic signaling for underwater communication. Whales speak in dialects, a recent study found. But few studies have looked at individual animal voices.

The scientists eavesdropped on three narwhals in Admiralty Bay on Baffin Island, Canada, using digital-recording devices that they suction-cupped to the whales' bodies.

"For the first time, we could really 'ride' with the animals as they were vocalizing and as they were moving," said Ari Shapiro of the Woods Hole Oceanographic Institution.

While one recorder was not retrieved, the spy tags from two of the narwhals revealed two individually-distinctive vocalizations, including whistle and pulsed sounds.

Shapiro suggested both the whistles, which have been shown to identify individual dolphins, and pulsed signals did not relate to foraging for food but rather to social communication.

Although relatively little is known about narwhal communication, scientists have suspected that like other whales, these beasts also have excellent hearing.

Found only in Arctic waters, the narwhal has a lone tusk that can be 6 feet long. They can migrate thousands of miles in large numbers, with subgroups moving in a coordinated fashion. So the distinct sounds could help individual members get in contact with other members of their group.

The results are reported in the September 2006 issue of the Journal of the Acoustical Society of America.