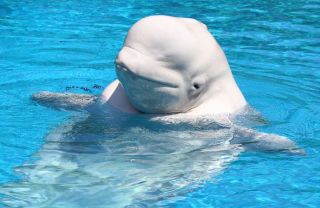 Beluga whales have round heads with a protruding melon that aids in echolocation and communication.
(Image: © CampCrazy Photography, Shutterstock)

Beluga whales, also called white whales, have white skin that is adapted to its habitat in the Arctic. The word "beluga" comes from the Russian word for "white." They aren't the same kind of white whale in "Moby-Dick," however. That was a white sperm whale. They also are not related to the sturgeon of the same name, which is the source of a type of caviar.

Belugas are related to another type of white whale — the "unicorn" whale known as the narwhal. However, instead of a large horn on its forehead, like the narwhal has, the beluga has a round bump called a melon. The melon is used to make many different communication sounds and facial expressions. It also aids in echolocation.

Beluga whales are among the smallest species of whales. Adult males range from 13 to 20 feet (4 to 6.1 meters) in length and weigh 2,000 to 3,000 lbs. (907 to 1,361 kilograms), according to National Geographic. Females are slightly smaller. Around 40 percent of the white whale’s body weight is blubber, which keeps them warm and stores energy, according to the National Oceanic and Atmospheric Administration(NOAA).

Belugas have thick, muscular bodies that taper at both ends. Their round heads have a small beak, and their necks are narrower than other whales. Unlike other whales, their neck vertebrae are not fused, allowing them to move their heads up and down and from side to side, according to the American Cetacean Society. They don’t have a back (dorsal) fin. This allows them to swim under ice with ease. Their flippers are short and resemble paddles.

These whales like it cold and are mostly found in the Arctic Ocean. They can live in water that beluga whales live in can be as cold as 32 degrees Fahrenheit (0 degrees Celsius).When the ocean starts to freeze, many migrate south to slightly warmer waters, according to National Geographic.

White whales are very social. Groups are called pods, which may have hundreds to thousands of whales, according to the Animal Diversity Web (ADW). They communicate with one another with sounds like clicks, moos, whistles and clangs. They can also mimic the sounds they hear around them, including human speech. Belugas are known as the "canaries of the sea" because the vast range of sounds they produce, according to the NOAA.

They also eat a lot — 50 to 60 lbs. (22.7 to 27 kg) of food a day. All of this food is swallowed whole. Their teeth are just used for grabbing and holding prey, according to the American Cetacean Society.

When they get their teeth, at 12 to 18 months, calves will start eating small sea creatures. Calves will continue to nurse, though, and aren’t weaned until they are a year- to year-and-a-half-old.

Scientists are unsure of how long beluga whales live. Some think they may live 35 to 50 years. Others believe they live 60 to 70 years based on how many teeth they lose per year, according to the NOAA.

Here is the classification of beluga whales, according to the Integrated Taxonomic Information System (ITIS):

According to the International Union for Conservation of Nature's Red List of Threatened Species, beluga whales are listed as near threatened. The population worldwide is more than 150,000 and their population is well distributed in most places. However, they are hunted by indigenous people in the Arctic and by commercial fisheries. This has led to population declines in those areas, such as West Greenland, where surveys found that beluga numbers had decreased by 62 percent between 1981 and 1994.

The population in Cook Inlet in Alaska is protected by the U.S. Endangered Species Act. The NOAA estimates that this isolated group has been severely reduced over the past several decades, from as many as 1,300 individuals in the 1970s to about 340 in 2014.