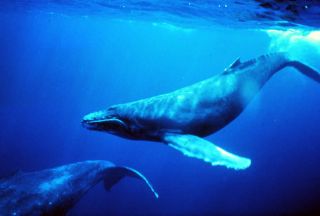 Humpback whales may sing not to court mates but to help explore the seas around them. When a male humpback moves someplace new, he changes his song to match those coming from other nearby whales.

"The traditional explanation for why whales do this is that male whales are singing to seduce female whales, and that females get really turned on by songs that are currently in style," said cognitive neuroscientist Eduardo Mercado III of the State University of New York in Buffalo. "A song that does not follow the most recent trends might be viewed as passé by females, so singers would need to keep current to compete."

But instead of learning songs to better attract females, Mercado suggests humpbacks do so to help navigate new locales.

In the complex underwater habitats where humpbacks live, figuring out where other whales are, just by listening, can prove quite challenging. Mercado suggests that singers can improve their ability to pinpoint other whales by learning their songs. By comparing incoming sounds that were likely degraded by journeying through the ocean with memories of pristine versions of those sounds, the whales can use any distortion they hear to judge the distance the sound has traveled.

"By analogy, a baseball player's knowledge about the size of a baseball can help him to judge when and where a fly ball will land," Mercado said. "This is the same basic process that bats, dolphins, and sonar operators use when they compare echoes to the signals that generated those echoes to locate and track targets."

Hawaii Institute of Marine Biology bioacoustician Whitlow Au, who did not participate in this study, agreed the reason why humpbacks sing remains unclear, and "any idea that might make sense is welcome." He said Mercardo's idea was interesting and reasonable, "but whether or not it is right is still to be determined."

While Mercado acknowledges there is no direct evidence yet supporting his idea, he adds there is similarly no direct proof that humpback songs are used for courtship.

Indeed, Mercado said there was evidence against the notion of humpback songs as serenades—for instance, most of the whales that join singers are other males, rather than females. Moreover, "whales are more likely to swim away when they hear a recording of a song than to approach the speaker," he explained.

Also, "how do females decide which songs are the best?" he asked. "If males hear several different songs, how do they judge whether the songs they hear are better or worse than their own? If singers are all trying to conform, why do they end up changing their songs over time so that they are singing new songs each year?"

To experimentally confirm or invalidate his idea, Mercado suggests playing songs at humpbacks to determine if the whales are more likely to copy a song when the song is sung from an impossible set of locations.

To explain, whale songs consist of series of sounds lasting a second or two followed by silences just a little bit longer. "Imagine slowly saying a long word like 'yesterday' out loud, then saying it twice in your head, then 'Bartholomew,' then saying that twice in your head, and then repeating this sequence for about three minutes," Mercado explained.

"Now, imagine you always play 'yesterday' from one boat, and always play 'Bartholomew' from a different boat," Mercado said. A whale that hears a single song broadcast from two different locations should have the impression that the singing whale it hears is essentially two places at once—"an impossible situation."

Mercado detailed his findings Nov. 28 at the Acoustical Society of America meeting in New Orleans.