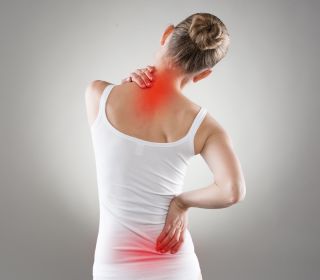 You may want to run and hide from chronic pain. But pain, it seems, does its best to hide from medication taken to provide relief.

An international team of researchers has found that chronic pain can be hard to treat because pain receptors normally found on nerve cell surfaces can move, migrating into the cell, which places them out of the reach of pain medications while they continue to pump out pain signals to the brain.

Yet the same group of researchers has found a way to ferry medication into the nerve cell to numb these pain receptors, providing long-lasting pain relief.

The researchers said the discovery, in rodents, may lead to the creation of new medications for people with chronic pain that are more potent but less prone to side effects, such as the risk of addiction that comes with pain-relieving opioids. Their work appears today (May 31) in the journal Science Translational Medicine.

Pain is the body's way of telling you something is wrong, and can be beneficial, raising your awareness of danger. Acute pain, such as the burn from a hot surface, tells your brain to move your hand away quickly. [5 Surprising Facts About Pain]

Chronic pain, as the term implies, is long-lasting; there's no universally agreed-upon definition, but most doctors consider pain lasting several months to be chronic. Arthritis, nerve damage and diseases such as multiple sclerosis are common causes of chronic pain. Nearly 50 million American adults experience chronic pain, according to statistics compiled by the Centers for Disease Control and Prevention.

Drugs that control pain include opioids, such as morphine and oxycodone, and nonsteroidal anti-inflammatory drugs (NSAIDs), such as ibuprofen. Yet opioids can be highly addictive, and NSAIDs can cause stomach, kidney and liver problems when taken in excess.

"Opioids and NSAIDs do not work for everyone and have unacceptable side effects, particularly when used over a long period of time," said Nigel Bunnett, a professor of surgery and pharmacology at Columbia University Medical Center in New York, who led the study.

In studying the pathways of pain signals, Bunnett's team may have found a better way to block pain that could require lower doses and thus fewer side effects, he said.

Disabling the NK1R is one approach to blocking pain, but most clinical trials of potential drugs targeting NK1R have been unsuccessful, Bunnett said. Now he knows why.

Bunnett and his colleagues discovered that NK1R, when stimulated by pain, quickly moves from the nerve cell's surface into intracellular compartments, called endosomes. In this protective bubble, NK1R continues to function for a prolonged period, pumping out signals for pain and inflammation. [America's Opioid-Use Epidemic: 5 Startling Facts]

Drugs created to deactivate cell-surface NK1R may not penetrate the cell membrane and reach the receptors hiding out in the endosomes, which is why these types of drugs often are less effective than hoped for, Bunnett said.

But the solution may be simple enough. Bunnett's group, based mostly at Monash University in Melbourne, Australia, where Bunnett maintains a dual appointment, attached a fat molecule to an NK1R-targetting drug to ferry the drug through the cell membrane and into the endosomes hiding the receptors. Fat molecules can easily pass through cell membranes. Piggybacking on the fat molecule enabled the drug to deactivate NK1R, providing lasting pain relief in rodents.

"[T]he really fascinating aspect of this work is the realization that by blocking the NK1 receptor in endosomes, rather than on the cell surface, as is traditional, we see quite different, and in this case beneficial, outcomes," said Christopher Porter, a professor of pharmaceutical sciences at Monash, who worked on the project.

Moreover, many kinds of G protein-coupled receptors can migrate toward the endosomes once activated, previous studies have found. So, transporting drugs into the cell to moderate the activity of these receptors may have the potential to enhance the effectiveness of many different classes of medications, the researchers said.

"Could endosomal-targeting strategies be applied to 'tune' the activity of many currently marketed drugs — or, indeed, future drugs — that target GPCRs? We think so, at least for those that internalize, and this is an ongoing focus," Porter told Live Science.

If further experiments on rodents prove successful, the group hopes to test its technique on humans.