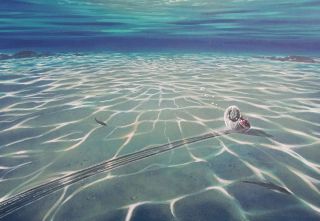 An artists' impression of a Jurassic-era ammonite that left a drag mark as lake currents pushed it around after its death.
(Image: © Dean Lomax/University of Manchester)

Sometime between 163 million and 145 million years ago, the lonely corpse of a dead ammonite gently rucked up the ocean floor, driven by calm and constant currents.

Now, anyone can explore a digital model of the 28-foot-long (8.5 meters) track that the spiral-shelled mollusk left behind, with the ammonite itself at the end. It's the longest fossil ever discovered that shows a drag mark as well as the animal that made it.

"The fossil is perhaps one of the most improbable fossils you'll ever see," said Dean Lomax, a paleontologist at the University of Manchester, who, along with his colleagues, published the digitization of the fossil today (May 10) in the journal PLOS ONE. "Drag marks of dead animals, along with the producer of the drag mark, are very rare in the fossil record." [In Images: The Oldest Fossils on Earth]

Perhaps the most famous of these rare fossils is a horseshoe-crab track discovered in 2002 that shows 32 feet (9.7 m) of the crab's final meandering steps before ending with the corpse of the crab itself.

Those kinds of fossil, showing the last moments of an ancient animal's life, are called mortichnia. The newly digitized ammonite fossil is not a mortichnia, because the ammonite was dead when the track was made: The soft-tissue lower jaw of the ammonite is missing, indicating that the remains were already in a stage of decomposition when the drag mark was made, the scientists said. Instead, researchers call fossils like this one "tool marks," indicating fossils made by inanimate objects pulled by the tide or currents. [See Video of the Ammonite 'Death Drag']

The ammonite fossil was discovered near Solnhofen, Germany, in the 1990s, in quarries known for preserving incredibly detailed fossils from the Jurassic period (199.6 million to 145.5 million years ago). (Otherworldly Archaeopteryxfossils have also been found in these Bavarian quarries.) It was prepared for study and display in 1998 and now resides in the CosmoCaixa Museum in Barcelona.

Lomax and his colleagues — who previously analyzed the fossilized death march of the horseshoe crab, also found in Bavaria — used a technique called photogrammetry to digitize the ammonite drag mark. This method involves taking hundreds of pictures of a fossil from certain angles and then using those photos to reconstruct a 3D digital model. The technique has been revolutionary for paleontologists, said study co-author Peter Falkingham of Liverpool John Moores University in the United Kingdom.

"It means that 3D video can be sent to scientists across the world, who can study the video (and photos) of the specimen without seeing the actual fossil," Falkingham said in an email to Live Science.

The track is about 0.2 inches (5.7 millimeters) wide at its beginning. There, only two grooves made by the ridges on the ammonite shell are visible, the researchers said. Over the course of the trackway, the drag mark gets wider and eventually reveals the impressions of 18 ridges. The ammonite was probably initially quite buoyant due to decomposition gases trapped inside its shell, the researchers wrote in their new paper. But the creature lost this buoyancy over time and dragged increasingly lower on the sandy seafloor, the researchers wrote.

The mark was likely made in water between 65 feet and 200 feet (20 to 60 m) deep, the researchers reported, and the ammonite corpse was probably dragged on by a gentle but continuous current that wasn't strong enough to disturb the sand on its own.

"If the current was very fast, then the ammonite would likely have bounced as opposed to drifted," Lomax told Live Science.

While a postmortem-drag fossil can reveal something about the environment, it can't explain anything about the animal's behavior — making it important to differentiate between postmortem drag marks and living trace fossils, the researchers said. The first postmortem drag marks ever discovered were thought to be made by living fish or turtles, Lomax said. But the discovery of more marks associated with ammonite fragments and shells demonstrated that those marks came from dead creatures, he said.

"More specimens equals a greater understanding and development of the science," Lomax said.