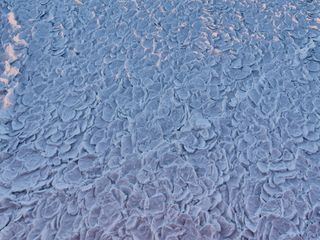 Ice that looks like a dragon's scales may sound like something from an episode of "Game of Thrones," but researchers recently observed the rare type of sea ice known as "dragon skin" in Antarctica.

Scientists aboard the U.S. icebreaker research vessel Nathaniel B. Palmer recently sailed to an Antarctic polynya — areas of open water that act as ice factories — to study the process of ice formation during the autumn-winter season. The "dragon-skin" sighting was an early highlight of the expedition, because the rare ice formation had not been seen in Antarctica since 2007, the researchers said.

Dragon skin occurs when strong "katabatic" winds — downslope winds that exist only over icy regions — continually lift the polynya's surface ice, subsequently freezing the water below, according to Guy Williams, a polar oceanographer from the Institute for Marine and Antarctic Studies at the University of Tasmania in Australia. This cycle produces 10 times more than the average amount of sea ice formed in the coastal polynyas, Williams said. [Collapsing Beauty: Image of Antarctica's Larsen Ice Shelf]

"Imagine your standard ice-cube tray, filled once. After a week, you get one tray of ice cubes. But if you empty and refill the tray each night, you get so much more," Williams said in a statement. "That is what the katabatic winds are doing in the polynya, removing the ice, exposing the water and making more ice form."

This constant uplift and formation of ice results in a scale-like appearance, giving the sea ice its dragon nickname. Dragon skin is also evidence of a "darker chaos" in the cryosphere (parts of the planet's surface where water is frozen), according to Williams.

The Nathaniel B. Palmer expedition is currently at "ground zero" of a katabatic wind event, Williams said, with hurricane-strength gusts topping 75 miles per hour (120 km/h). During this brutal interaction between the polar ocean and atmosphere, the seawater freezes as freshwater ice, according to the researchers. When the seawater freezes into ice, its salty brine is rejected and falls into the underlying water, making it very cold and dense.

"We will spend the next two weeks taking advantage of quiet periods when the katabatic winds drop off to observe the increase in salinity of the shelf waters below polynyas as brine rejected during sea-ice formation rains down to depths below 1,000 meters [3,280 feet]," Williams said.

Research aboard the Nathaniel B. Palmer vessel is ongoing as the icebreaker continues to sail across the Ross Sea in West Antarctica.