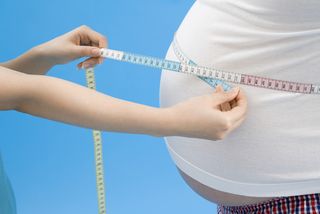 It's common for people to pack on more pounds as they age, but now a new study may have an explanation for this weight gain — and it has nothing to do with exercise or poor food choices.

Researchers identified an enzyme that appears to increase its activity in animals as they age. The increase in this enzyme's activity may play a role in the weight gain and fitness decline that come with aging, they said.

In experiments in mice on a high-fat diet, the researchers found that mice that had this enzyme blocked gained less weight than normal mice.

"Our society attributes the weight gain and lack of exercise at mid-life … primarily to poor lifestyle choices and lack of will power," study author Dr. Jay Chung, head of the Laboratory of Obesity and Aging Research at the National Heart, Lung, and Blood Institute, said in a statement. "But this study shows that there is a genetic program driven by an overactive enzyme that promotes weight gain and loss of exercise capacity at mid-life," Chung said. [The Best Way to Keep Weight Off]

Because the new study was conducted in mice, researchers don't yet know if blocking this enzyme in humans will have the same effect. But the researchers said that, with more research, the findings could potentially lead to the development of new weight loss medications that would block this enzyme.

Chung said he has always been puzzled by the tendency of adults to gain weight as they age — the average American gains 30 pounds from ages 20 to 50, even though people don't usually eat more food during this period, he said.

Chung and his colleagues looked for molecular changes that occurred in animals during middle age and found that an enzyme called DNA-dependent protein kinase, or DNA-PK, increases in activity with age.

Their research showed that this enzyme is involved in  metabolism (such as the conversion of nutrients to fat) and in the production of mitochondria, or the "powerhouses" in cells that turn nutrients into energy. It's known that as people age, they see a drop in the number of mitochondria.

In the study, the researchers found that giving mice that were on a high-fat diet a drug that inhibits DNA-PK led to a weight gain in those mice that was 40 percent less, compared to mice that were also on this diet but didn't receive the drug.

In addition, mice that received the drug saw an increase in the number of mitochondria in their skeletal muscle cells, and experienced increased aerobic fitness.

"Our studies indicate that DNA-PK is one of the drivers of the metabolic and fitness decline that occurs during aging, which makes staying lean and physically fit difficult" in older age, Chung said. [How to Lose Weight in 2017 (and Keep It Off for Good)]

However, the researchers noted that the findings don't mean people should abandon diet and exercise as they get older, since these are still the primary tools for fighting obesity. Middle-age adults should continue with these practices, even if it takes a while to see results, they said.

The study was published in the May issue of the journal Cell Metabolism.