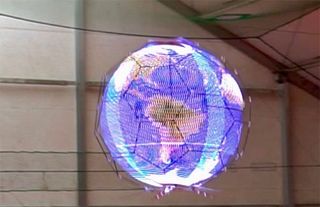 The drone is surrounded by eight curved LED strips that spin rapidly during flight, creating the illusion of a spherical screen.
(Image: © NTT DOCOMO)

Forget plane-pulled banners ― there may be a new way to advertise in the sky.

The Japanese telecom company NTT DOCOMO recently revealed what it claims is the "world's first spherical drone display." Although it appears to be a solid, globe-shaped screen while in flight, the display is actually an unmanned aerial vehicle (UAV, or drone) inside a spherical frame with curved LED strips. The LEDs spin rapidly during flight, creating the illusion of a spherical screen. The drone display was showcased April 29-30 during the Niconico Chokaigi conference, a festival of Japan's internet culture.

Though the technology is not yet ready for commercial use, the company said it should be available by March 2019. These flying screens could be used for advertisements during a sporting event, or to display information at a concert, according to DOCOMO. [Photos from Above: 8 Cool Camera-Carrying Drones]

"Going forward, the company will explore potential entertainment and messaging solutions for event venues, including stadiums and concert halls," company officials wrote in a statement.

Previously, it was challenging to equip a drone with a spherical display because it  interfered with the airflow of the drone's propellers, according to DOCOMO. In addition,  the display's weight tended to drag down the aircraft. The telecom company solved these issues by using a mostly hollow display, which allows for better airflow and is lightweight.

The spherical frame surrounding the drone has a maximum diameter of about 35 inches (88 centimeters), and the display measures 144 pixels high by 136 pixels wide. The entire device, drone and display, weighs just 7.5 pounds (3.4 kilograms). Since it's relatively small and light, the drone display is highly maneuverable and, according to DOCOMO, could be operated virtually anywhere.