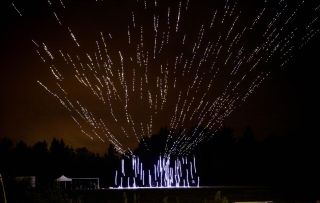 The "fireworks" display was not produced by pyrotechnics, but by hundreds of individual drones each fitted with an LED light.
(Image: © Guinness World Records)

Fireworks sparkled in the night sky over a football field in Germany recently, but no one heard a single boom. That's because the fireworks show was, in fact, a swarm of 500 LED-lit drones aiming to break a world record.

The pyrotechnics-free display was part of Intel Corporation's fake-fireworks drone program. With a 500-drone fleet, Intel broke its own Guinness World Record for the most unmanned aerial vehicles (UAVs) airborne simultaneously. The company first set the record in 2015 with 100 drones. This year, Intel engineers programmed 500 drones to perform a fireworks-style routine. [Gallery of Wonders: The Weirdest World Records]

The company specifically designed its "Shooting Star" — a small quadcopter drone outfitted with an LED light — to put on dramatic light shows. Made of foam and plastic, these tiny drones weigh just 0.5 lbs. (280 grams) each. The LED lights are capable of creating more than 4 billion color combinations, according to Intel's fact sheet on the drone. The company also claims that the software and animation interface allows users to create a light show in a matter of days, instead of weeks or months.

For the world-record attempt, Intel programmed the drones to create a fireworks-like show. In the finale, the drones flew in formation to create the number 500 and then the Intel logo.

The Shooting Stars can move together as a drone fleet, operated by one pilot using a laptop.

"These drones are able to fly as a fleet," Daniel Gurdan, Intel's engineering lead, said in a statement. "This is the first time ever we can show it works so well with so many drones!"