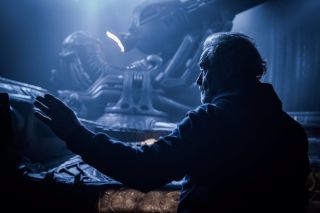 Film director Ridley Scott, who delights in terrifying moviegoers with his cinematic blend of horror and science fiction, suggested in a recent interview that the scary prospect of belligerent invading aliens might transcend the realm of sci-fi. According to Scott, hundreds of alien species are "out there" on distant worlds, and Earth's inhabitants should prepare for the worst if they ever decide to visit our planet.

One scientist, though, says that Scott's information about such hostile, and abundant, aliens is off-base and unsupported.

Scott told Agence France-Presse (AFP) about his belief in "superior beings," while fielding questions about his latest movie, "Alien: Covenant," opening in theaters in the U.S. on May 19. He warned that any extraterrestrial travelers who are technologically advanced enough to show up on our doorstep would likely be very intelligent and very hostile. And unlike the scenarios that dominate movies — if we go toe-to-toe with these invaders, we probably won't be the victors, he said.

"If you are stupid enough to challenge them you will be taken out in three seconds," Scott told AFP. [Greetings, Earthlings! 8 Ways Aliens Could Contact Us]

In the interview, Scott explained that "the experts" estimate there are "between 100 and 200 entities" on other planets, following what could be a similar evolutionary path to ours. And if they get here first, our best bet would be to "run for it," AFP reported.

The possibility of intelligent, technologically adept alien life has intrigued science-fiction writers and readers since the French writer Voltaire published his short story "Micromégas" in 1752, describing two extraterrestrial visitors to Earth — one from the planet Saturn and one from a planet orbiting the star Sirius.

Scott has made his own contributions to the genre, most notably with his string of "Alien" movies, which imagine a highly adaptable and morphologically flexible alien species. The so-called xenomorphs breed quickly and are ruthlessly efficient at overpowering humans, either swiftly dismembering them or cultivating them as hosts for their young — luckily, in isolated locations that are far from our home planet.

But though Scott is a skilled sci-fi yarn-spinner, his assessment of real-world alien threats could use a script doctor, according to Seth Shostak, senior astronomer with the SETI Institute, a research institution dedicated to the search for communication signals produced by intelligent extraterrestrial life.

To begin with, Scott's "expert" estimate of 100 to 200 "entities" is entirely unsubstantiated, Shostak told Live Science.

"We have absolutely no data that would tell you what that number might be," he said.

In fact, estimates based on data about known planets and galaxies suggest that the actual number of intelligent extraterrestrial life forms could, in fact, be significantly higher. With approximately 1 trillion planets in our galaxy alone, and about 2 trillion more galaxies, that adds up to…well, it's a lot of planets, Shostak said. [Why Do We Imagine Aliens as 'Little Green Men'?]

To narrow the search a bit, scientists could start by just looking at the trillion planets in our own galaxy, he said. Only a fraction of those planets might be capable of supporting life — perhaps 1 in 10. And maybe only 1 in 1,000 could produce and support life more complex than bacteria, he said.

That gives us about a billion planets in our galaxy that might harbor some type of intelligent life. But over time, life on many of those planets could have already waxed and waned — self-destructed or been wiped out. Perhaps only one planet in a million of those intelligent-life-harboring worlds still support life capable of contacting humans. That adds up to about 1,000 planets that could potentially hold intelligent, extraterrestrial species, Shostak told Live Science.

However, if a planet is more than 70 light-years from Earth, it hasn't yet received any radio signals from us. Its residents, no matter how technologically adept, wouldn't know humans exist yet. Even if long-distance observations of Earth told them we had oxygen in our atmosphere — and thereby some form of life — they'd be very unlikely to travel all this way to look at what might amount to just a lot of bacteria, Shostak added.

Neither would extraterrestrials be likely to invade our solar system merely to steal our resources, he said. If a civilization is advanced enough that they've exhausted all the resources of their entire star system — every planet, moon and asteroid — and are all out of natural materials, they're probably at a stage where they could create what they needed from simpler materials in their own backyard, rather than traveling across the galaxy for a very limited supply, Shostak said.

It's equally unlikely they'd be showing up because they thought humans would make an excellent addition to their diet, he said.

"To do that, they would have to know that we had something interesting within our bodies that they could metabolize, and their body chemistry would probably be very different from ours," Shostak said.

But Scott did get one thing right: If extraterrestrials are capable of building spacecraft that can transport them to our planet, they certainly would be technologically "superior" to people, Shostak said. And if he saw a spaceship suddenly appear, Shostak admitted that he'd probably do as Scott suggested — and just "run for it."