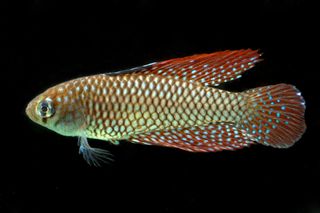 Poop may hold the secret to preserving youth — at least for some fish.

In a recent study, scientists discovered that older fish lived longer when they fed on microbes from younger fish's feces. Their findings suggest that the microbiome —communities of single-celled organisms such as bacteria, fungi and viruses — plays a role in the aging process.

In their study, the scientists examined turquoise killifish (Nothobranchius furzeri), a vertebrate with one of the shortest life spans on Earth. Killifish reach sexual maturity at 3 weeks old, and die after only a few months of life. As these fish age, their gut bacteria become less diverse, the researchers noted. To test whether increasing microbiome diversity might affect the aging process, the scientists introduced the gut bacteria of younger fish to the older fish. [Body Bugs: 5 Surprising Facts About Your Microbiome]

Middle-age, 9.5-week-old killifish were presented with the gut contents of 6-week-old killifish, lead author Dario Valenzano, a geneticist at the Max Planck Institute for Biology of Ageing in Germany, told Nature. Though killifish don't eat feces, the older fish ingested microbes when they pecked at the fecal material to see if it was food, Valenzano said.

"Recolonizing the gut of middle-age individuals with bacteria from young donors resulted in life span extension and delayed behavioral decline," the researchers wrote in the study. "This intervention prevented the decrease in microbial diversity associated with host aging and maintained a young-like gut bacterial community."

The older fish that consumed the microbes from the younger fish had a different bacterial makeup after doing so, according to the researchers. And at 16 weeks old, these "senior" fish that received younger microbes still had gut microbiomes similar to those of 6-week-old killifish, the researchers said.

"Our findings demonstrate that the natural microbial gut community of young individuals can causally induce long-lasting beneficial systemic effects that lead to life span extension in a vertebrate model," the researchers concluded in the study.

Though the findings showed the impact of younger microbes, it's unclear how, exactly, these microbes influence the fish's life span, Valenzano told Nature. The researchers are continuing their experiments, now working with fruit flies, to better understand how the microbiome is connected to aging.

Details of the study were published online April 6 on bioRxiv, a preprint website for biology research that has not yet been peer-reviewed.