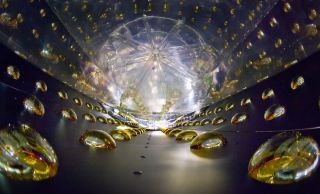 Proposed elusive subatomic particles that only fleetingly interact with matter through gravity may not exist, at least if new data from a nuclear reactor is any indication.

Scientists had long noticed a discrepancy between the predicted and actual number of antineutrinos, or the antimatter partners to neutrinos, produced in nuclear reactors. Now, a new analysis suggests that this reactor antineutrino discrepancy isn't the result of a new hypothetical particle known as a sterile neutrino. Instead, the theoretical models may have been wrong all along, data from the Daya Bay nuclear plant in China suggests.

"Among the possible explanations, the most exciting one is that we have a new piece of physics," such as sterile neutrinos, said Kam-Liu Bak, the spokesperson for the Daya Bay Collaboration. "That explanation is now unlikely." [The 18 Biggest Unsolved Mysteries in Physics]

Neutrinos are nearly massless, chargeless and incredibly elusive particles. The ghostly particles are produced in the sun's fiery heart and 100 billion pass through each centimeter of our bodies unnoticed every day. Their antimatter partners, called antineutrinos, form in nuclear reactors (on Earth) during beta decay, a process whereby a heavy isotope ejects a neutron from its nucleus, which then converts into an electron and an antineutrino.

It is this beta decay process that is at the heart of the so-called reactor antineutrino anomaly. In 2011, scientists updated a theoretical particle physics model that predicted how often antineutrinos should be detected inside nuclear reactors. Based on this new model, data from around the world revealed that reactors were producing fewer antineutrinos then expected: Some of the predicted antineutrinos were somehow vanishing.

One of the leading theories to explain the discrepancy argued that some of these missing antineutrinos were transforming into hypothetical particles called sterile neutrinos. Sterile neutrinos, would interact with other matter only via gravity, but not the weak force, as other neutrinos do. Sterile neutrinos were theoretically appealing in part because they share similar properties with, and could possibly explain, dark matter — the mysterious substance thought to make up most of the matter in the universe; dark matter does not interact with visible light.

Recently, however, the case for sterile neutrinos has been on shakier ground. In 2016, a huge subterranean experiment known as the IceCube Neutrino Observatory came up empty in its search for sterile neutrinos. That meant that if sterile neutrinos did exist, then they would have to exist in an energy range outside of most currently running neutrino experiments. [IceCube Photos: Physics Lab Buried Under Antarctic Ice]

The new study has further chipped away at the need for sterile neutrinos. Bak and his colleagues pored over data from the Daya Bay nuclear plant. Daya Bay produces nuclear power via the fission of radioactive elements such as uranium and plutonium. They analyzed the ratio of neutrinos and antineutrinos produced at varying energies, and how many total neutrinos were produced, looking at the more than 2 million antineutrinos produced over four years of operation.

The current study found that the number of antineutrinos generated from radioactive plutonium-239 (plutonium atoms with 94 protons and 145 neutrons) matched theoretical predictions, but the antineutrino ratio produced by the decay of radioactive uranium-235 (92 protons and 143 neutrons) was significantly lower than predicted by models. If sterile neutrinos were behind this anomaly, there should be the same fraction of missing antineutrinos emerging from the radioactive decay of plutonium as from uranium. Instead, it's likely the model is the source of the anomaly.

"That is really the smoking gun of our latest result," Bak told Live Science.

However, that doesn't completely rule out the existence of these ephemeral particles, Bak added.

"The trouble is, as the name implies, the sterile neutrino is essentially extremely elusive — it's even far more elusive than other neutrinos," Bak said. "It's possible that we're looking at the wrong place, they may still be hiding somewhere."

The findings were published in February in Physical Review Letters.