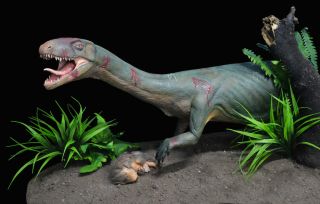 This model shows the newly identified species, Teleocrater rhadinus, preying on a young cynodont, a distant relative of mammals. T. rhadinus was a carnivorous reptile and an early cousin (not an ancestor) of dinosaurs.
(Image: © Museo Argentino de Ciencias Naturales)

Before the mighty Tyrannosaurus rex, spiky stegosaurus and other dinosaurs roamed the Earth, their early cousins — creatures that were surprisingly crocodile-like — trod through what is now modern-day Tanzania, a new study reports.

The discovery of this newfound species fills a gap in the evolutionary, or phylogenetic, tree that has puzzled researchers for decades. Many researchers suspected that the creature filling this hole would be more dinosaur-like and bipedal, but the new study shows otherwise.

"Even though we had been predicting that some kind of animal should occupy this part of the phylogenetic tree, until you find it you don't know what all of its features will look like," said lead study researcher Sterling Nesbitt, an assistant professor of geosciences at Virginia Tech. "One of the surprises was that [its] ankle looked more like a crocodile [than that of a dinosaur or bird]." [See Images of the Croc-Like Creature]

Researchers named the croc-like beast, which resembles a modern-day monitor lizard, Teleocrater rhadinus. The genus name refers to the Greek "Teleos" and "krater," which mean "complete" and "bowl," respectively — a reference to its closed hipbone socket. The species name borrows from the Greek "rhadinos," the word for "slender," because the animal itself was quite skinny. It would have weighed between 20 and 65 lbs. (9 and 30 kilograms), the researchers said.

The carnivorous reptile measured between 7 and 10 feet (2 and 3 meters) long and sported a lengthy neck and tail, Nesbitt told Live Science. It lived about 245 million years ago during the Triassic, before the first-known dinosaur lived about 231 million years ago (older, so-called dinosaur specimens have been found, but it's hard to say for sure whether they came from dinosaurs, the researchers said).

The paleontologist F. Rex Parrington discovered T. rhadinus in Tanzania in 1933, and Alan Charig, the former curator of fossil reptiles, amphibians and birds at the Natural History Museum in London, studied it in the 1950s. Charig never published a study on the creature, but informally named it T. rhadinus, a name the researchers of the new study kept to honor him.

The new study was spurred by the discovery of at least three additional specimens (also found in Tanzania) in 2015 that had more preserved details, including the animal's ankles and parts of its skull, Nesbitt said.

All of the animals on the bird side of the "V" have bird-like ankles (that is, a simple hinge that goes up and down), while the crocodilians have croc-like ankles, which can go up and down and side to side, Nesbitt said. Researchers once thought that the bird-crocodilian's common ancestor — the animal at the bottom of the "V" that lived about 250 million years ago — had ankles that were neither crocodile-like nor bird-like, Nesbitt said.

He added that although T. rhadinus is not a direct ancestor of dinosaurs, it is the earliest-known relative on the dinosaur side of the "V." In addition, an analysis of the growth rings in its bones (which are like growth rings in a tree) show that it grew more like a dinosaur did, with fast growth in early life, than a crocodilian, the researchers said.

"Scientists generally don't love the term 'missing link,' but that's kind of what Teleocrater is: a missing link between dinosaurs and the common ancestor they share with crocodiles," study co-researcher Kenneth Angielczyk, an associate curator of fossil mammals at the Field Museum in Chicago, said in a statement.

The findings were published online today (April 12) in the journal Nature.