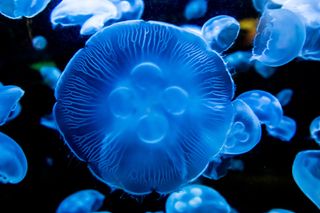 The sea is full of bioluminescent creatures, like this moon jellyfish.
(Image: © Richard A McMillin/Shutterstock)

Marine life has figured out a way to cope. New research finds that a full three-quarters of sea animals make their own light.

The study, published April 4 in the journal Scientific Reports, is the first to really quantify animal bioluminescence in the ocean. It turns out that the ability to glow isn't rare at all.

"I'm not sure people realize how common bioluminescence is," study researcher Séverine Martini, a postdoctoral researcher at the Monterey Bay Aquarium Research Institute (MBARI), said in a statement. "It's not just a few deep-sea fishes, like the angler fish. It's jellies, worms, squids … all sorts of things." [Gallery: Images of Glowing Aquatic Life]

Most bioluminescent organisms are subtle with their shine, which explains why researchers hadn't counted them as light emitters before: Many cameras can't even detect the dim glow. For sea creatures living in pitch blackness, though, a little mood lighting is all that's needed — bright lights would be overkill and would probably just attract unwanted attention from predators. Many bioluminescent creatures also turn their light on and off to avoid attracting dangerous passersby.

Martini and her colleagues undertook the first systematic, quantitative survey of bioluminescence in Monterey Bay, which is off the coast of California. The seafloor in Monterey Bay drops off quickly into a submarine canyon, so the researchers had a lot of depth to explore. They used video by remotely operated vehicles from 240 dives in and around the canyon, tallying every animal larger than 0.4 inches (1 centimeter) seen between the surface and 13,123 feet (4,000 m) deep.

The researchers then compared the species they'd observed with lists of known bioluminescent organisms. Up to 40 percent of the deepest-living animals — below 6,562 feet (2,000 m) — had to be classified as "undefined," meaning there is not enough data to be sure if they glow or not, simply because species that deep are so little-understood.

Despite the mystery of the deepest-dwelling species, the researchers found that about 75 percent of animals across all layers of the ocean were either definitely or likely to be bioluminescent. This was surprising, because they expected the number of bioluminescent organisms to increase at greater depths.

At the surface, the biggest bioluminescers were jellyfish and siphonophores (jelly-like colonial animals that include the Portuguese man o' war). As many as 99 percent of species in those two groups could produce their own light.

Between 4,920 feet and 7,380 feet (1,500 to 2,250 m), the ocean's glow is largely thanks to marine worms, the researchers reported. Larvaceans, tiny free-swimming filter feeders, made up about half of the bioluminescent organisms lower than 7,380 feet.

Martini's research may set the stage for a new way to estimate the number of animals in the deep ocean. If scientists could measure bioluminescence at a given depth and knew the proportion of animals at that depth that glowed, they could theoretically estimate the total number of animals living there without actually counting them. Martini and her colleagues are now working on developing instruments to make those sorts of measurements possible.