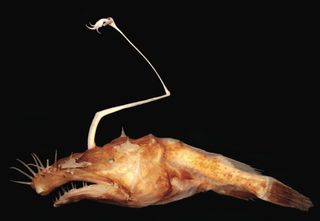 A female of the newfound Lasiognathus dinema species from the Gulf of Mexico.
(Image: © Theodore Pietsch, Ph.D. University of Washington)

Lurking in the dark depths of the sea, a new species that looks more like an alien than a fish has been discovered, a creature with needlelike teeth and a glowing fishing pole of sorts atop its head.

Scientists spotted three females of the new species of anglerfish between 3,280 feet and nearly 5,000 feet (1,000 and 1,500 meters) beneath the Gulf of Mexico. The little fish, whose bodies ranged in length from 1.2 to 3.7 inches (30 to 95 millimeters), live under extreme conditions: No sunlight penetrates their deep habitats where they endure immense pressures of more than 2,200 pounds (1 ton) per square inch.

Now called Lasiognathus dinema, the anglerfish stood out from other species in its genus by the curved appendages jutting out from its so-called esca, or the organ at the tip of the "fishing rod" that contains light-producing bacteria. The species name dinema comes from the Greek words "di" for "two" and "nema" for "thread," referring to the threadlike extensions sprouting from the bases of the light organ's hooks, the researchers, Tracey Sutton of Nova Southeastern University in Florida and Theodore Pietsch of the University of Washington, write in the journal Copeia (published by the American Society of Ichthyologists and Herpetologists). [See Photos of a Creepy, Deep-Sea Anglerfish]

Anglerfish use this lure to reel in unsuspecting fish that mistake the light for a meal.

The researchers aren't sure whether or not Lasiognathus dinema can move its head rod at will, but it seems likely. "This particular group of anglerfishes has never been seen alive, but based on the musculature and anatomy, it looks like they have a great deal of control over the 'fishing rod,'" Sutton told Live Science.

The researchers found just females of this species but suspect the males would be smaller, as other anglerfish in the suborder Ceratioidei show extreme sexual dimorphism — females of the species Ceratias holboelli, for instance, can be some 60 times longer and a half million times heavier than the males.

The males in this group also often lack any lure and some fuse themselves to the female, living off of nutrients from her bloodstream, providing sperm to fertilize her eggs in return.

"So far, we do not have any female specimens with males, but there are so few specimens of this group that are known, the best answer would be, 'We don't know if the males attach themselves in this genus,'" Sutton said.

Like the newfound creature, most anglerfish are relatively small beasties — male Photocorynus spiniceps may be the world's smallest vertebrate — but Sutton has seen one off Iceland spanning nearly 3 feet, he said.

The team found the haunting new species while out on the Gulf as part of the Natural Resource Damage Assessment Process conducted by the National Oceanic and Atmospheric Administration. Lasiognathus dinema was found near the Macondo wellhead at depths where intrusions of hydrocarbons from the BP oil spill in 2010 were reported.