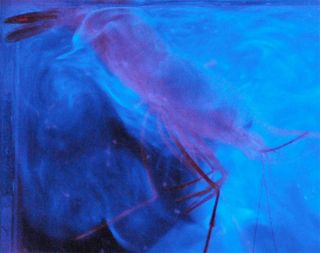 From glowing coral to shrimp that vomit light-making chemicals, seafloor creatures can create quite the flashy visual show, according to researchers who traveled into the inky depths of the Caribbean Sea to investigate the oddballs.

Even so, the researchers reported today (Sept. 6) seafloor creatures are less flashy than their open-ocean cousins. In the open sea, an estimated 90 percent of organisms have the capacity to glow, compared with a paltry 10-20 percent of seafloor dwellers.

"We were surprised by how little bioluminescence is down there," Tamara Frank, a marine ecologist at Nova Southeastern University and study coauthor, told LiveScience.

The researchers did, however, find an abundance of bioluminescence from plankton, creatures that cannot swim against a current and instead glow bluish after bumping into other organisms and structures.

The glowers at the ocean bottom included the world's first identified glow-in-the-dark anemone along with a shrimp species that vomits light as a defense mechanism, glowing coral, starfish and sea cucumbers. [See Photos of the Glowing Deep-Sea Creatures]

In the Caribbean, glowing organisms don't just make for a visual spectacle, but also have finely honed visual systems that may allow bottom dwellers to distinguish what's a meal and what's poison, a sort of color-coding vision.

Bioluminescence, light given off through a chemical reaction in living creatures, has long piqued the curiosity of researchers since Greek philosopher Aniximenes found that light emanated from water when struck by an oar nearly 2,500 years ago.

Since then, oceanographers have identified many bioluminescent organisms, including the sorts of plankton that Aniximenes would have seen, but little remains known about the phenomenon at the ocean bottom.

Researchers ventured in the Johnson-Sea-Link submersible to nearly half a mile below the ocean surface in what could be the world’s first manned hunt for bioluminescent creatures in the benthic zone, the ecological niche of the seabed.

"If you sit there with the lights out, you'll see this little light show as plankton run into different habitats," study researcher Sönke Johnsen, a sensory biologist at Duke University, told LiveScience. "There is no substitute for actually being in that habitat to understand what it's like to be those animals, plus it's a great deal of fun."

The team of oceanographers surveyed the bottom of the Caribbean Sea at two different sites at a depth unreachable by natural light and to their surprise found that while few organisms could light up, what light there was came from jostled plankton.

The submersible had an arm that allowed researchers to poke creatures to determine if they glowed. Only one out of every five bottom-dwellers cast a glow, a relatively low number, the researchers said.

In 2011, researchers with the University of Aberdeen’s Oceanlab used a remote ultra-sensitive camera to capture bioluminescence at the Atlantic Ocean floor at depths two to three times that of the Caribbean research. The U.K. researchers found relatively high levels of bioluminescence on the ocean floor, much of which came from organisms bumping into rocky terrain.

At half a mile below sea level, the water above filters out most of the sunlight spectrum and leaves only blues. Because of this, researchers figured that ocean bottom creatures would be colorblind — after all, most of them are foraging in nearly complete darkness. [Vision Quiz: What Can Animals See?]

To their surprise, the researchers found some sea creatures such as crabs could detect blue light along with ultraviolet and violet light.

"There is absolutely no UV and violet light coming down at that depth, it's long gone," Johnsen said. So why do the creatures use their resources to detect UV and violets?

The duo-color detection could help animals distinguish between the bluish edible plankton and the greenish potentially poisonous animals that live at the ocean bottom, researchers hypothesized.

"It is only a hypothesis, we could be wrong," Johnsen said. "But we can't think of another reason why an animal would use this ability to see UV and violet light because there isn't solar light left."

In the future, the researchers hope to verify their color-coding hypothesis with behavioral experiments of the deep-sea creatures in a lab setting and eventually to return to the deep sea to find more benthic animals that detect UV and violet light.