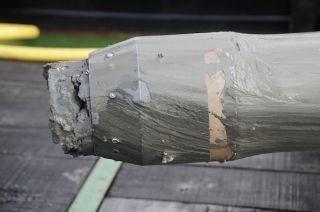 An example of a core sample (this one with sediment dating back to the Ice Age).
(Image: © Image © Science/AAAS, photograph by Bo Barker Jørgensen.)

Microbes living in the seabed below the deep ocean are taking the slow-food movement to extremes. According to new research, these microorganisms are subsisting on nutrients first laid down when dinosaurs still walked the Earth.

Nutrient-carrying sediment rarely makes it to the deep seafloor at the North Pacific Gyre far north of Hawaii. If a grain of sand falls to the seabed, it will be another 1,000 years before another grain lands on top of it, said Hans Røy, aquatic ecologist at Aarhus University in Denmark and leader of the new study, published Thursday (May 17) in the journal Science. And yet, an expedition to the North Pacific turned up populations of incredibly slow-living microbes in these depths.

"It's pretty amazing, because if you look at the deepest parts, these are layers that were laid down back when the dinosaurs were walking on this planet, and there has been no input of new organic material since that," Røy told LiveScience. "They've been chewing on the same bone for 86 million years." [Top 10 Immortals]

Research stretching back to the late 1980s suggests that as much as 90 percent of the Earth's microorganisms live in the seabed, Røy said. But these microbial communities remain mysterious, largely because they resist typical laboratory experiments. If you wanted to measure the metabolism (how fast the body uses energy) of microbes living in coastal mud, you'd simply take some mud and track how fast they burned through the oxygen in that sample. Because coastal seafloor organisms live in a nutrient-rich, fast-turnover world, the experiment would only take a few minutes.

To do the same thing with the slow-living bacteria found beneath the North Pacific Gyre, you'd have to wait 1,000 years to detect a change in oxygen levels, Røy said.

That's what makes the new discovery important, he said. The bacterial communities living in the Pacific have been chugging along for millions of years. All scientists have to do is go out and measure their activities. [Expedition Gallery: Plumbing the Depths]

During an expedition on the U.S. Navy research vessel R/V Knorr, Røy and his colleagues drilled long columns of sediment called cores out of the seabed. They first sampled from a long stretch along the equator, varying their distance from land, but not their latitude. Next, the vessel sailed north into the Pacific, and researchers took seabed samples at different latitudes, but all at equal distances from land.

Slow living in the seafloor

In most places, oxygen penetrates only a millimeter into the ocean bed, sometimes making it as much as about a foot and a half (0.5 meters) in deep-sea zones. But in the deep North Pacific Gyre, researchers hauled up cores 98 feet (30 m) long and found oxygen reaching all the way down.

The reason, Røy said, is that so few nutrients reach the seabed here that the microbes in the seafloor barely eat. When they don't eat, they don't use oxygen. Thus, the oxygen hangs around in the sediment for thousands of years.

The researchers aren't sure how old the individual microbes in the colonies are. It takes the microbes 1,000 years to double their biomass, they calculated. In comparison, a familiar microbe like the food-poisoning bug salmonella might take between 20 minutes and two hours to double, depending on its environment.

Cells double their biomass to divide, so the results suggest the microbes are at least 1,000 years old. But that number is a minimum, Røy said.

"Maybe they grow and divide, but the result could just as well indicate that they have a long repair cycle where over a 1,000-year period, they actually replace all the compartments of the cell," he said. "If that is the case, the cells could be much older."

The study is "one of the best glimpses yet into this glacially slow pace of life in the subsurface," said Tori Hoehler, a research scientist at NASA Ames Research Center in California who was not involved in the study. The microbes in these deep-sea colonies have a metabolic rate 2 million times slower than an average human cell, Hoehler told LiveScience. And if you were to measure the oxygen used in about 11 square feet (1 square meter) of sediment in these North Pacific areas, it would take 10 years for the bacteria within that area to consume the amount of oxygen that a person uses in a single breath.

The study emphasizes how small a portion of life the microbes and other organisms studied by humans really are, Hoehler said.

"We live in a sunlit world where a lot of energy flows through the system, and it allows for a lot of flourishing biology, but that's really just a thin skin on the surface of our planet," he said.