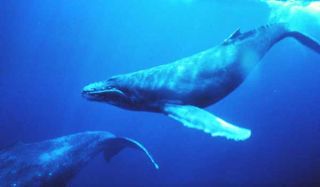 Whales play an important role in fertilizing the ocean, by carrying nutrients from the deeper water toward the surface, where they defecate. Meanwhile, fish and zooplankton excrete nutrients in a way that pushes them deeper into the water.
(Image: © Louis M. Herman/NOAA)

While many mammals produce excrement in clumps, whale poop is more of a slurry. "Very liquidy, a flocculent plume," says whale expert Joe Roman at the University of Vermont. Flocculence is a state of fluffiness, akin to a tuft of wool.

Whale poop doesn't sink to the bottom of the ocean. Rather the fluffy plume floats at the surface. And in a new study, Roman and colleague James McCarthy at Harvard University found this phenomenon explains an important way for ocean ecosystems are fertilized.

Smaller organisms, like microbes, plankton and fish, are typically thought of as the stars of the cycling of nutrients through ocean food chains. However, marine mammals, as big as many of them are, have often been overlooked as players here, according to the researchers.

Whales, by virtue of their nutrient-rich feces, play an important role in transporting nutrients from where they feed, in deep waters, up to the surface, where they often do their business and fertilize tiny, floating plants called phytoplankton, the researchers explain.

"We think whales form a really important direct influence on the production of plants at the base of this food web," McCarthy said.

As part of the research, the team analyzed 16 fecal samples from humpback whales in the Gulf of Maine during two whale-tagging cruises, finding nitrogen concentrations in the humpback whale samples was elevated by as much as two orders of magnitude above typical in this area. They also incubated the samples, with their constituent microbes and phytoplankton. Results showed a strong link between the production rate of a form of nitrogen used by microbes and phytoplankton, and whale-poop nitrogen.

The presence of whales allows more phytoplankton to grow, pushing up the production of creatures that eat the phytoplankton, the researchers say of the findings. The result: "bigger fisheries and higher abundances throughout regions where whales occur in high densities," Roman said.

In some parts of the ocean, nutrient pollution, such as agricultural runoff, over-fertilizes the water creating dead zones, as in the Gulf of Mexico. However, many areas in the Northern Hemisphere lack sufficient nutrients, including the Gulf of Maine, where this study was conducted. During the summer, productivity is limited there because of limited nitrogen, such that adding nitrogen to the waters, say, in the form of whale poop, should trigger phytoplankton growth.

The size of whale populations before they were decimated by whaling is not clear, although some genetic evidence indicates that about 10 percent of the original populations remain, according to Roman.

"Anyway you look at it, whales played a much bigger role in ecosystems in the past than they do now," Roman said.

In light of this finding, calls to loosen international restrictions on whaling are ill-conceived, they said.

Their work was published Oct. 11 in the open-access-journal PLoS ONE.