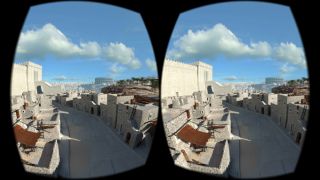 The "Lithodomos VR" app allows people to experience archaeological reconstructions of ancient Jerusalem, at the height of the city's splendor under Roman rule in the first century.
(Image: © Lithodomos VR)

Visitors to Jerusalem and virtual tourists alike can now see the city as it looked in ancient history, with a virtual-reality app based on archaeological reconstructions of the city at the height of its splendor under Roman rule in the first century.

The program, named "Lithodomos VR," is a paid android app for smartphones and portable virtual-reality headsets that was launched on Google Play in December 2016. The app sells for $1.99 on Google Play, and $2.99 in the Apple App Store. Developed by Simon Young, an archaeology doctoral student at the University of Melbourne in Australia, the app includes a 3D virtual view of the area around Jerusalem's Western Wall, where the ancient stone walls of the city's Temple Mount can still be seen.

By using the app on a portable VR headset and smartphone, visitors to the Western Wall can compare the modern-day view with a 3D, 360-degree reconstruction of the ancient city from the same location, when the wall and the Jewish temple above it had been newly built on the orders of Herod I (74 B.C.- 4 B.C.), the Roman-backed king of Judea. [See Photos of the VR App and Ancient Jerusalem]

Young told Live Science that the reconstruction of the first-century scene was faithful to the latest archaeological research, and will be updated as new research becomes available.

"The VR content that we are deploying on the app is the result of carefully researched material from archaeological excavations, site plans, elevation drawings, photographs of textures and [geographic information system] mapping, as well as topographical data from NASA's ASTER digital elevation models," he said. "So all the content is linked in to the real world."

The VR scenes of Jerusalem in the Lithodomos VR app are based on the archaeology of the city years after Herod rebuilt the Temple Mount around 20 B.C., Young said, and before the destruction of the temple precinct by Roman troops in A.D 70, during the rebellion against Roman rule that became known as the Jewish Revolt.

In addition to the virtual view of the ancient Western Wall, the app includes a reconstruction of a market street in the city, where the virtual houses are based on real excavations. The featured objects, such as ceramics and street furniture, were modeled on data from first-century artifacts in Israeli museums, according to Young.

"We're really making sure that rather than just being haphazardly thrown together, what you're seeing really does correspond to the research," Young said.

"I see virtual reality as a really important way of communicating what is often a lifetime of work for many archaeologists," he added, "so there's a line I don’t cross."

Another virtual scene is an elevated view from a bridge to the entrance of the temple, the remains of which are known as Robinson's Arch. [The Holy Land: 7 Amazing Archaeological Finds]

"From there, you can see the slope of Mount Zion and the Roman-period settlements, as well as the back of a theater, and to the left you can see the Antonia Fortress [the barracks of the Roman garrison] and the Jewish settlement. So, you can see about 1 kilometer (0.6 miles) in every direction," Young said.

Young's career as a software developer began as he studied for his Ph.D. in archaeology at the University of Melbourne. (His thesis on ancient cityscapes was submitted in September, and he's waiting to hear the results.)

Young explained that he taught himself 3D-modeling as part of his studies on the architecture of ancient cities, and began experimenting with virtual reality when the Oculus Rift headset became available.

"I thought, I can take my 3D models and put them into this machine," he said, "and then when I put the headset on, there I was, standing in one of my buildings."

Lithodomos has also released a second, free app on Google Play and for Oculus Rift,featuring VR reconstructions of the Odeon of Agrippa in Athens, the Temple of Venus in Rome and the Arena of Lutece in Paris. The arena is a city park where a Roman theater and an arena for gladiators stood in the first century A.D.

"The idea is that when you visit an ancient site, say the Odeon of Agrippa, you take out your headset, stand in the right spot, and look around — and what you will see is exactly a perfectly mapped reconstruction within a few centimeters to the real world," Young said.

Future developments will include new software features, such as the ability to view the changes over time in VR scenes at each location, he said

"Our goal is to show the evolution of an important place through time, like the Roman forum — from the time it was a cow market, right up to the sack of Rome by the Goths [in 410 A.D.]," Young said. "But, as they say, Rome wasn't built in a day."

Editor's Note: This story was updated to correct the app developer's name. His name is Simon, not Sean.