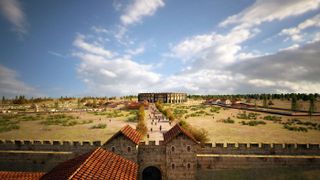 The team, from the Ludwig Boltzmann Institute for Archaeological Prospection and Virtual Archaeology (LBI ArchPro), created digital reconstructions of what the area around the amphitheater would have looked like.
(Image: © LBI ArchPro/7reasons)

Just like spectators at modern-day sporting events, people who attended ancient Roman gladiator fights would have gotten hungry and might have even wanted to shop for little souvenirs.

Archaeologists in Austria say they have detected the remains of the bakeries, fast-food stands and shops that would have served spectators at the ancient Roman city of Carnuntum.

Today, Carnuntum is a sleepy town on the southern bank of the Danube, outside Vienna. But in its heyday, it was the fourth-largest city in the Roman Empire, and it was home to as many as 50,000 people, including, for a few years in the second century A.D., the philosopher-emperor Marcus Aurelius. [See Reconstructions of the Ancient Roman Shops and Arena]

If you visit the site today, you can see some of the ruins, like the monumental Heathen's Gate and the amphitheater. But much of Carnuntum's sprawling remains are still hidden underground beneath pastures, and in recent decades, the site has been threatened by plowing, construction and looting by treasure hunters.

To study the underground city without disturbing it, Wolfgang Neubauer, director of the Ludwig Boltzmann Institute for Archaeological Prospection and Virtual Archaeology (LBI ArchPro), has been using noninvasive methods, such as aerial photography, ground-penetrating radar systems and magnetometers.

In 2011, Neubauer and his colleagues identified a gladiator school at Carnuntum, complete with training grounds, baths and cells where dozens of gladiators lived like prisoners.

During their latest survey, the researchers found Carnuntum's "entertainment district," separate from the rest of the city and just outside the amphitheater, which would have seated some 13,000 spectators.

They identified a wide, shop-lined boulevard leading to the amphitheater. By comparing the structures to buildings found at other well-preserved Roman cities, such as Pompeii, Neubauer and his colleagues identified several types of ancient businesses along the street.

"Oil lamps with depictions of gladiators were sold all around this area," Neubauer said, so some of the shops likely sold souvenirs. The researchers found a series of taverns and "thermopolia" where people could buy food at a counter.

"It was like a fast-food stand,"Neubauer told Live Science. "You can imagine a bar, where the cauldrons with the food were kept warm."

They also discovered a granary with a massive oven, which was likely used for baking bread. Material that has been exposed to high temperatures has a distinct geophysical signature, so when Neubauer's team found a big, rectangular structure with that signature, they thought, "This must be an oven for baking."

"It gives us now a very clear story of a day at the amphitheater," Neubauer said.

The survey also revealed that there was once another, older wooden amphitheater, just 1,300 feet (400 meters) from the main amphitheater, buried under the later city wall of the civilian city.

The team announced the findings March 30 and plans to publish the results in an academic journal.