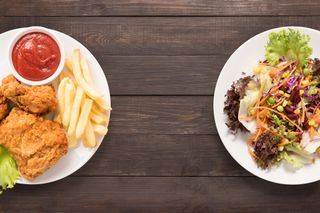 This was the question posed by Dr. Stephen O'Keefe, a gastroenterologist at the University of Pittsburgh School of Medicine.

The answer, O'Keefe said, is yes — particularly when it comes to colon cancer.

Large, long-running epidemiological studies have concluded that there is indeed a link between the foods a person eats and his or her risk of colon cancer, O'Keefe said on Monday (April 3) here at the American Association for Cancer Research's annual meeting. These studies suggest, for example, that a diet rich in red meat and processed meats is linked to an increased risk of the disease. In contrast, a fiber-rich diet is linked to a decreased risk, he said.

And research in recent years has shown that the multitudes of bacteria that reside in the human gut — known collectively as the microbiome — could explain this connection.

Studies done in labs have shown that certain bacteria break down the remains of fatty and protein-rich foods in the large intestine, O'Keefe said. During this process, the bacteria produce compounds such as secondary bile acids that have been shown to cause inflammation and cancer in lab studies, he said. Other bacteria, that break down fiber-rich foods in the large intestine, produce compounds such as butyrate that have been shown to be protective against cancer, he said. [Body Bugs: 5 Surprising Facts About Your Microbiome]

Lab studies and observational studies are good in principle, but what happens in practice? O'Keefe asked. The strongest type of evidence generally comes from intervention studies, where scientists intervene with one group of people, asking them to make a change, and then also include a comparison group that doesn't make that change. Such studies help to show that a given health effect, such as a lowered risk of colon cancer, is due to food, and not to other factors.

O'Keefe recently conducted a unique experiment to look at the effects of diet and colon cancer risk. His findings were published in 2015 in the journal Nature Communications.

The study included 20 African-Americans, a group that generally has very high rates of colon cancer, and 20 Africans from rural South Africa, where the rates of colon cancer are very low. At the beginning of the study, the researchers analyzed the microbiomes of all the participants, and performed colonoscopies to look at the health of the colon.

The researchers also compared the two groups' diets: The African-Americans, on average, ate two to three times more animal protein and fat and than the rural Africans, and significantly less fiber.

Then, for two weeks, the scientists asked the groups to switch diets. The rural Africans ate an American diet that was high in fat and low in fiber, including such foods as meatloaf, hamburgers, french fries, pancakes and sausage. The African-Americans, on the other hand, were given a high-fiber, low-fat diet, with foods such as mango slices, fiber-rich cornmeal, lentils and tilapia, according to the study. [6 Distinctive Food Guides from Around the World]

At the end of the two weeks, the researchers performed the same tests once again.

Similarly, there was an increase in the abundance of the microbes that break down protein and fat in rural Africans, and a decrease in African-Americans, he said.

The researchers also saw changes in how the lining of the colon looked in both groups; for example, the lining was more inflamed in the rural Africans after they spent two weeks eating the high-fat, low-fiber diet.

O'Keefe noted that although there were changes, "I don't want you to go away with the idea that certain microbes or nutrients are good or bad. They all have essential roles to play in the body." It may be more important to look at how the microbes interact with one another, he said. For example, after eating the low-fat, high-fiber diet, the microbes in the African-American group showed a greater network of interaction — in other words, more microbes were "communicating" with each other. But the interactions decreased after eating a high-fat, low-fiber diet, he said.

Ultimately, the microbes in the gut and the compounds they produce represent a very dynamic system — and one that can be changed based on a person's diet, O'Keefe said.

"Suffice it to say, that food has important effects on the total body," O'Keefe said.