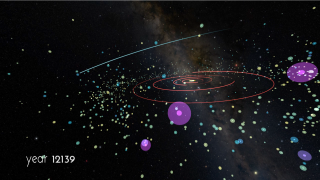 This visualization of "Planet Nine" illustrates the discoveries being made in the Kuiper Belt, the uncertainty about the location of this hypothetical planet and computer simulations of distant areas in the solar system.
(Image: © Patrick McPike, Mark SubbaRao and Mike Brown)

Is there a distant ninth planet in our solar system? The short film "Planet Nine" makes the case, and was recently named the People's Choice for video in the 15th annual Vizzies Challenge.

"Planet Nine" presents the evidence a ninth planet may be circling in the farthest reaches of the solar system, using visualizations to illustrate the scientific research into where this hypothetical planet may reside. The award-winning film is presented as a sky show at the Adler Planetarium in Chicago.

"Our goal with this show was not to teach people about Planet Nine, and it certainly wasn't to convince them that the Planet Nine exists, " Patrick McPike, a visual engineer at the planetarium, said in a statement. "The show is really about the excitement and process of the scientific discovery. We hope that the show gets people more involved in science, whether that is by following science news more closely or by studying it themselves."

Visual media is an important aspect of communicating science, and so the National Science Foundation (NSF) joined with Popular Science magazine to launch the Vizzies Challenge. From photographs to interactive applications, made by professionals or hobbyists, the Vizzies recognize the best visual representations of scientific research, according to the NSF. [See Images of Amazing Science Visualizations]

Artists submit their work to the Vizzies Challenge, and from those hundreds of submissions a team of experts from NSF and Popular Science select 50 finalists. For the Expert's Choice winners, a panel of outside experts makes the decision. The People's Choice winners, however, are voted on by Popular Science readers. There is both an expert's choice and people's choice winner for each category: photograph, video, illustration, interactive, and posters and graphics. The winning artists' are awarded cash prizes, $2,000 for expert's choice winners and $250 for people's choice.

Winners this year included an artistic depiction of the human brain. Neuroscientist Greg Dunn, of Pennsylvania State University, and his Penn State colleagues combined several techniques, along with neuroscience data, to etch 500,000 neurons into sheets of gold for this image. It's "a reminder that the most incredible machine in the universe" is inside each of us, the team wrote in the statement.

Another winning illustration shows the micropumping of a hummingbird's tongue. To capture the Zika virus in all its hideousness, David Goodsell, an associate professor at the Scripps Research Institute, combined 10,000 images made by cryo-electron microscopy. The result, which won a People's Choice award for illustration, reveals in breathtaking detail the envelope surrounding the virus along with the RNA (a molecule similar to DNA) that lives inside the virus, allowing it to replicate.

One of the photos that was recognized by the Vizzies shows an 8-week-old starfish larva churning water to search for food. "A Hungry Starfish Larva" won the Expert's Choice for photography, and is part of a time-lapse video of the larva's water vortex.

Science visualizations are not only striking, but also crucial in helping the public understand scientific ideas, according to Amy Schellenbaum, online director for Popular Science.

"They are a great way to help a larger group of people understand the amazing occurrences taking place right under our noses every day," Schellenbaum said in a statement.

The winners for this year's Vizzies Challenge are as follows:

Illustration Experts' Choice: "Self Reflected Under White, Red, and Violet Light," by Greg Dunn, Brian Edwards and Will Drinker.