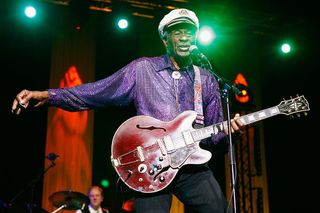 In the days following Chuck Berry's death, commentators have trampled over each other in a race to honor him as the "Father of Rock and Roll," the art form's lodestone and mastermind. They've marveled at his songs, not just because of how witty, influential and danceable they were, but because they were the work of Berry alone.

A few have mentioned a lawsuit involving Berry's longtime piano player Johnnie Johnson, where Johnson claimed he was Berry's co-writer, but which the court dismissed because he took too long to sue. And that's all they say.

As a St. Louis lawyer, teacher and music geek, I had heard about the case a few years back and wondered if there was more to the story than simply "Johnson sued too late."

I felt this case was still important, given the songs' seismic cultural influence, as well as Berry's notorious reluctance to discuss his creative process ("Talking to Chuck Berry about his music is a little like meeting God and finding out He doesn't remember making the Earth or care what people do there," author and MTV executive Bill Flanagan once wrote).

So I reached out to the attorneys, and they gave me access to the case file, which, until then, had been gathering dust in storage, unavailable for study. First, in 2015, I used it to explore authorship in copyright law. But now, as we reflect on Chuck Berry's life, I think the case of Johnson v. Berry has an even greater meaning: a search for truth in the fog of legend.

‘In a roundabout sense, I suppose he did'

On Aug. 21, 2002, sitting in a nondescript little conference room inside a St. Louis law firm, Chuck Berry was asked something that called into question not only his own legacy, but that of rock and roll itself.

Two years prior, Johnnie Johnson had sued Berry. In his suit, Johnson claimed he'd co-written, on his piano, nearly every song in Berry's remarkable 1950s and ‘60's run – "Roll Over Beethoven," "Back in the U.S.A." and "Nadine," among many others – classics that helped sow the seeds of a worldwide musical and cultural revolution.

Having gotten neither credit nor a dime of the millions in royalties those songs had generated, Johnson set out – nearly 50 years later – to rewrite history via the courts.

Though the case had started slow – lawyers jousting, sending letters, serving subpoenas – on that day in August 2002, inside that little conference room, Johnson's attorney had the chance to ask Chuck Berry, in person and under oath, the question that cut to the heart of the case:

"No" or even "Hell no" would have been perfectly acceptable (and, to Berry's lawyers, highly desirable) answers. But instead, Berry's response was profoundly equivocal:

A good trial lawyer could've made a lot of hay with that: "Mr. Berry has testified that Johnnie Johnson helped create these songs in a roundabout sense…just not in a legal sense," one can easily picture a jury hearing in closing argument, "but you, ladies and gentlemen, get to decide how the law applies here, not Mr. Berry."

A jury, however, would never hear the case. On Oct. 21, 2002, just two weeks before trial was set to begin, the judge ruled against Johnson. He decided that the statute of limitations had expired – Johnson had waited too many years to sue – and that was that. Or was it?

Father(s) of rock and roll?

In the course of Berry's sworn deposition, and Johnson's own, taken two months earlier, the two men spoke more expansively about their part in rock and roll's creation than they ever had before – or ever would again.

Interestingly, but perhaps not surprisingly, they spoke most freely when discussing how they worked together.

They even played their instruments – Johnson on piano and Berry on guitar and piano – trying to show what they did and how they did it.

Neither man would bend on his respective legal position. On that, reasonable minds can disagree. It's not easy to mark the point at which a creative contributor becomes a co-author. But both men were candid about the creative process, itself, and how it was fueled by their musical interplay. That is what's most instructive for us today.

Most of us view Berry as the self-reliant father of rock and roll, the mastermind who created these amazing songs essentially from scratch. Others see Johnson as the jilted, true composer of the music that turned Berry's lyrics into classic songs.

But read what Berry and Johnson have said themselves, under oath, and you can see it was a collaboration – their unspoken musical bond – that gets closest to the truth of how these classic, wildly influential songs were born.

Society often constructs (and then fights to preserve) myths around individual genius. Collaboration – with past influences, as well as with present partners – isn't nearly as sexy. But it's how works of genius regularly get written, designed, sculpted, filmed and recorded. From the songs of Leiber and Stoller and Holland-Dozier-Holland, to the film "Casablanca," to the writings of Raymond Carver, collaborative creativity has produced many of our most prized cultural treasures, often without our knowing it.

And sometimes, perhaps, an individual genius finds a partner, one who helps him hit a creative zenith higher than he could've reached alone. Recognizing this in the story of Chuck Berry – or at least acknowledging its possibility – doesn't detract from his legacy; it honors it more deeply.

Near the end of the film "Hail! Hail! Rock 'n' Roll," director Taylor Hackford asked Berry how he wanted to be remembered.

"I tell you what," Berry replied. "Whatever it be, I just hope it's real and it's a fact, which will be the truth. That's it. I hope they'll just speak the truth be it pro, con, bad, good."