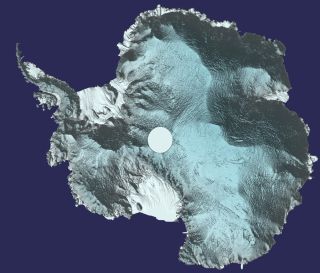 Scientists have created a 3D view of Antarctica by combining 250 million measurements taken by the European Space Agency's CryoSat mission between 2010 and 2016.
(Image: © CPOM)

A new three-dimensional view of Antarctica shows off the southernmost continent in all of its rugged glory.

The map was created using satellite data from the European Space Agency's (ESA) CryoSat research satellite. It can be downloaded at a University of Leeds website and will soon be hosted at the portal for the United Kingdom's Center for Polar Observation and Modelling (CPOM).

"We used around 250 million measurements taken by CryoSat between 2010 and 2016 to create the most comprehensive picture of Antarctic ice elevation currently available," Tom Slater, a researcher at the center, said in a statement.

CryoSat uses radar altimetry to measure ice-sheet thickness at the North and South poles. This method involves beaming radio waves toward the ground from a satellite and measuring the time it takes for the reflected waves to bounce back. The instrument aboard the CryoSat satellite is the first of its kind designed for monitoring ice, according to the ESA; it can also measure sea level. [Images of Melt: Earth's Vanishing Ice]

The measurements are useful to scientists who are trying to understand changes in the Antarctic ice sheet, including where increased snowfall is causing accumulating ice and where melting and iceberg calving are causing ice losses.

"This should benefit not only studies of the Antarctic ice sheet, but also projections of future sea-level rise," Andrew Shepherd, the director of CPOM, said in a statement.

As the climate warms, Antarctica's ice is changing. In 2002, the Larsen B Ice Shelf collapsed spectacularly, and a massive rift in the Larsen C Ice Shelf is threatening to do the same to that floating ice. When floating ice shelves collapse, they do not raise sea levels by themselves, but their loss does remove a barrier to the flow of land-based ice into the oceans.

Scientists have observed a trend toward melting on the land-based West Antarctic Ice Sheet in recent years, according to the National Snow and Ice Data Center. The data from East Antarctica has been trickier to interpret, with some research finding that the region was adding ice because of increased snowfall. (Warm air can hold more moisture, so as the globe warms, precipitation might increase in some areas.) Because of the balancing act between ice loss in the West and ice gains in the East, there has been a long-running scientific controversy over whether the continent as a whole is losing or gaining ice.

Alarmingly, field scientists recently discovered huge craters called moulins on East Antarctica's Roi Baudouin Ice Shelf. The melt features had never been seen before on an ice shelf. Research published in the journal Nature Climate Change in December 2016 on the moulins and new satellite data found that East Antarctica may be more vulnerable to melt than scientists had thought.