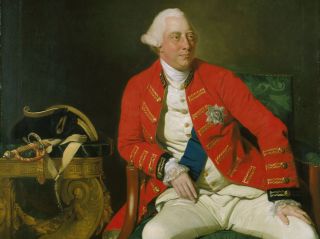 "Portrait of George III of the United Kingdom" by Johann Zoffany. The painting was completed in 1771, when King George III was 33 years old.
(Image: © The Royal Collection)

Hundreds of letters written by King George III, the so-called "Mad King," support the modern diagnosis that he suffered from mental illness during his later years, a new study found.

Using computer analysis, researchers investigated letters written by George during his 60-year reign over Great Britain and Ireland, from 1760 to 1820. They compared writings from periods in his life when he was thought to be mentally unsound, to letters he wrote when he appeared healthy.

The researchers programmed a computer so that it learned to identify 29 written features to differentiate between the writings of people who had mental disorders and people who did not. It analyzed features such as complexity of sentence structure, vocabulary richness, and word variation and repetition. The computer then searched for those features in the king's letters, comparing changes in writing style to identify deteriorating mental health, the new study reported. [5 Controversial Mental Health Treatments]

George was widely considered to be a cultured monarch. He founded — and funded — the Royal Academy of Arts, was the first British monarch to study science and established a vast royal library, of which 65,000 volumes were later donated to the British Museum, according to a biography posted on the British royal family's website.

But George was also held responsible for "losing" the American colonies, which declared their independence in 1776. Great Britain's defeat exacted a toll on the king's health. He went through periods of physical and mental illness from 1788 to 1789 and during 1801, the royal family's website reported. And by 1810, the king's mental condition had deteriorated so much that he was unfit to continue as king, and his oldest son, George IV, assumed the throne as Prince Regent.

Accounts from a royal physician who attended George III during an early episode of illness described the king as undergoing "an intire [sic] alienation of mind," while his wife, Queen Charlotte, told a confidante that George "often spoke 'til he was exhausted, and the moment he could recover his breath began again, while the foam ran out of his mouth," according to a study published March 2010 in the journal History of Psychiatry.

The madness of kings

For the new study, the researchers enlisted a technique called "machine learning," in which a computer is programmed to learn from the data it collects. In this case, the researchers trained a computer to identify what could be signs of mental illness in King George III, as defined by the writing style in his letters, said study co-author Peter Garrard, a professor of neurology at St. George's University of London.

"King George wrote very differently when unwell, compared to when he was healthy," Garrard said in a statement.

"In the manic periods, we could see that he used less-rich vocabulary and fewer adverbs. He repeated words less often, and there was a lower degree of redundancy, or wordiness," Garrard said.

Prior studies had determined that computers could identify disordered language that was characteristic of people suffering from schizophrenia, dementia and bipolar disorder, the researchers reported. And when the scientists applied this type of analysis to George's letters, they found differences that marked a stark contrast between periods of mental health and "acute mania," a historical medical term referring to a condition that could resemble the manic phase of bipolar disorder, the study authors wrote.

The cause of George III's mental decline has not been well-understood. In 1969, an analysis of the king's condition published in Scientific American suggested that his troubling "psychotic" episodes were the byproduct of a metabolic disorder called porphyria, a hereditary condition with mental symptoms that can include hallucination, bouts of paranoia and depression. And in 2005, researchers reported evidence that the doctors who treated the ailing king may have inadvertently worsened his condition by giving him doses of arsenic. [Senses and Non-Sense: 7 Odd Hallucinations]

However, it was later questioned whether the porphyria diagnosis was accurate, despite its widespread acceptance. Scientists argued in 2010 that the 1969 study ignored or underrepresented evidence from medical accounts, and they suggested that porphyria might not be the cause of the king's illness. Furthermore, there was little substantial evidence of George's urine being significantly discolored, a distinctive porphyria symptom.

The new findings hint that King George III likely suffered from a mental illness not related to porphyria, a diagnosis that the scientists described in the study as "thoroughly discredited."

"In the modern classification of mental illness, acute mania now appears to be the diagnosis that fits best with the available behavioral data," the researchers wrote in their study, which was published online March 22 in the journal PLOS ONE.