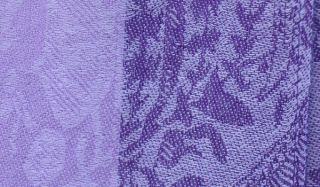 The color purple has been associated with royalty, power and wealth for centuries. In fact, Queen Elizabeth I forbad anyone except close members of the royal family to wear it. Purple's elite status stems from the rarity and cost of the dye originally used to produce it.

Purple fabric used to be so outrageously expensive that only rulers could afford it. The dye initially used to make purple came from the Phoenician trading city of Tyre, which is now in modern-day Lebanon. Fabric traders obtained the dye from a small mollusk that was only found in the Tyre region of the Mediterranean Sea.

A lot of work went into producing the dye, as more than 9,000 mollusks were needed to create just one gram of Tyrian purple. Since only wealthy rulers could afford to buy and wear the color , it became associated with the imperial classes of Rome, Egypt, and Persia. Purple also came to represent spirituality and holiness because the ancient emperors, kings and queens that wore the color were often thought of as gods or descendents of the gods.

Sometimes, however, the dye was too expensive even for royalty. Third-century Roman emperor Aurelian famously wouldn't allow his wife to buy a shawl made from Tyrian purple silk because it literally cost its weight in gold. Talk about sticker shock.

Purple's exclusivity carried over to the Elizabethan era (1558 to 1603), during which time everyone in England had to abide by Sumptuary Laws, which strictly regulated what colors, fabrics and clothes could and couldn't be worn by different classes within English society. Queen Elizabeth I's Sumptuary Laws forbid anyone but close relatives of the royal family to wear purple, so the color not only reflected the wearer's wealth but also their regal status .

The hue became more accessible to lower classes about a century and a half ago. In 1856, 18-year-old English chemist William Henry Perkin accidently created a synthetic purple compound while attempting to synthesize quinine, an anti-malaria drug . He noticed that the compound could be used to dye fabrics, so he patented the dye and manufactured it under the name aniline purple and Tyrian purple, making a fortune in the process.

The color's name was later changed to "mauve" in 1859, based on the French name for the purple mallow flower, with chemists calling the dye compound mauveine. And that's how the elite royal color became widely available and affordable thanks to a young scientist's serendipitous experiment.