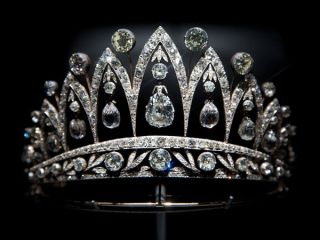 What's the tradition behind the tiara that Kate Middleton might not wear on her wedding day?
(Image: © etee/flickr)

Kate Middleton is allowed to choose any one of Queen Elizabeth II’s tiaras to wear on her wedding day. There's quite an assortment of bling to choose from, though, and she has yet  to decide which she'll don -- or even if she'll wear one at all.

Royal figures have been wearing tiaras for centuries as a way of displaying their superior social status. The headpieces can be traced back to ancient Greece, where Greek gods, kings and leaders were depicted wearing diadems, a type of ornamental headdress that established their authority.

Over time, royal headgear evolved into crowns for queens and kings and the smaller, semicircle-shaped tiaras for princesses. Although the custom differs from country to country, princesses in Great Britain can wear a tiara only once they are married.

Hence, Queen Elizabeth II has offered Middleton her pick from her personal tiara collection for the royal wedding day. This seems to be another tradition within the British royal family, since the queen has given all of her daughters-in-law a tiara as a gift on their wedding day. Princess Diana, however, decided to wear her grandmother's Spencer family tiara.

Although Middleton has yet to announce which tiara she'll wear -- if any at all -- rumors began circulating that she may be leaning toward the Russian Fringe Tiara after an anonymous bidder placed a nearly $10,000 wager with a betting company in Egham, England, that Middleton will pick it for her wedding day.

Queen Elizabeth II herself wore the Russian Fringe Tiara on her wedding day in 1947. Made in 1830, the tiara was also worn by the Queen Mother and Princess Anne at their weddings. If Middleton does decide to don the tiara, it could be her something old as well as something borrowed.