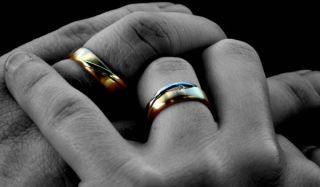 Civil unions permit gay couples to declare themselves as each other's reciprocal beneficiaries, which provides them the equivalent of a spouse's rights to hospital and nursing home visitation.
(Image: © follmann | sxc.hu)

Prince William's decision to forgo wearing a wedding ring has ruffled a few feathers, but, historically speaking,his choice actually isn't all that unusual.

The wedding ring tradition goes back centuries, at least for women. Archaeologists have found evidence that ancient Egyptian brides wore wedding rings, but wedding bands for men did not come into vogue until the latter part of the last century. During World War Two, soldiers began wearing the rings as a reminder of their wives, and the tender gesture spread.

Today, a majority of grooms choose to wear their rings as a symbol of their love and devotion . But some, like Prince William, prefer not to -- a decision that often invites inquiries.

"People may be suspicious of Prince William's decision not to wear a wedding ring because history is replete with kings and princes who failed to fulfill their marriage vows ," Jodi R. R. Smith, president and owner of the Massachusetts-based Mannersmith Etiquette Consulting firm, told Life's Little Mysteries.

"Whether or not a groom chooses to wear his ring is a decision he and his new bride should decide together," Smith said. "It is not as if wearing a wedding ring provides any sort of guaranteed insurance of fidelity from either spouse. The ring is truly symbolic. Some couples place more value on this symbolism than others. There is only an issue if the spouse is upset, hurt or insulted by the lack of jewelry. Other than that, it truly is no one else's business."

So what are some reasons why a groom may chose not to wear his wedding ring?

"There are several reasons, but the biggest reason boils down to a man's occupation," etiquette expert Jacqueline Whitmore, founder of the Protocol School of Palm Beach, a Florida-based etiquette consulting firm, told Life's Little Mysteries.

"If a man has an occupation that requires a lot of work with his hands -- such as a mechanic, plumber, roofer, personal trainer, etc. -- a wedding ring could get in the way and also prove to be hazardous," said Whitmore, author of "Business Class: Etiquette Essentials for Success at Work."

Comfort is also a factor.

"There are some men who are very tactilely sensitive and the wearing of a wedding ring drives them to distraction," Smith said. "This is different from the newlywed who plays with his ring just because he is not used to wearing it yet."

As for whether a groom's decision to forgo a wedding ring is considered discourteous to his bride, both experts agree that it simply comes down to a personal preference and has nothing to do with etiquette . "It is only insulting to the bride if she allows it to be," Whitmore said. "This is a non-issue if both husband and wife are secure in their marriage."

Besides, with all of the media attention that the royal wedding has received, it's not like anyone would mistake Prince William for a single man just because he's not donning a ring.