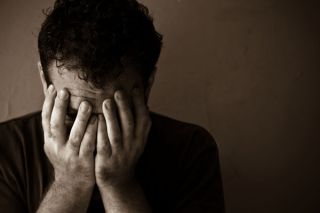 A diagnosis of major depression does not evoke much response, either a stigmatizing or supportive, from a person's social network, a study indicated.
(Image: © Oleg Golovnev | shutterstock)

Being labeled as having a severe and visible mental disorder, such as schizophrenia or bipolar disorder, tends to "out" sufferers publicly with somewhat contradictory effects, new research finds.

People known to have these disorders are more vulnerable to stigma and discrimination, according to study researcher Brea Perry of the University of Kentucky.

But being labeled with such disorders can also evoke a strong supportive response from close friends and families, she found while analyzing interviews with 165 individuals with bipolar disorder, schizophrenia, major depression and other less severe disorders who were undergoing mental health treatment for the first time.

Some forms of schizophrenia and the manic phase of biopolar disorder attract attention because they involve emotional and behavioral excesses, essentially causing sufferers to act out. In contrast, people with disorders characterized by deficits — such as major depression — come across as socially disengaged and unable to provide companionship or intimacy, Perry writes in a recent issue of the Journal of Health and Social Behavior.

Her results indicated that major depression and symptoms related to it evoked more of a nonresponse from people around someone suffering from it.

"Perhaps because so many people are diagnosed and subsequently treated successfully, signs of depression do not alarm friends and family members to the same degree as disorders known to severely affect functioning," Perry writes.

The emotional and social withdrawal associated with depression may also lead its sufferers to be less likely to reach out to friends and family for help or to accept it. However, compared with their schizophrenic or bipolar counterparts, those with depression and similar disorders are also less vulnerable to stigma, she writes.