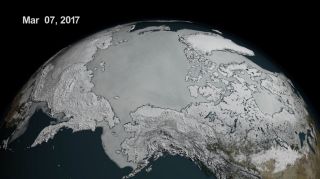 Sea ice at Earth's poles is dwindling, and it reached record lows this month, scientists report.

Whether global warming is the culprit of the new records is not known, though most scientists agree that warming temperatures in the Arctic have resulted from human-caused climate change, according to the National Snow and Ice Data Center (NSIDC). And over the past 30 years, Earth's northern cap has warmed more than any other region on the planet, NSIDC scientists said.

Some changes to polar ice are natural. Every year, the sea ice at both poles goes through its seasonal cycle of growing in the winter to its maximum extent and shrinking during the warmer months. Winters and summers are flip-flopped at the North and South poles. That means the Arctic sea ice reaches its minimum extent for the year in September, around the same time the ring of ice around Antarctica expands to its maximum coverage of the year. (That same flip-flop happens in February or March, with ice coverage reaching its maximum extent in the Arctic and minimum in the Antarctic.)

This year, the maximum and minimum sea-ice coverage in the Arctic and Antarctic, respectively, broke records for being the lowest ever seen. [Images of Melt: Earth's Vanishing Ice]

Warmer-than-average temperatures and other factors, such as storms, during the winter slowed ice growth, the researchers said.

The record is part of a trend: Every decade since 1979, the Arctic's maximum ice extent has dropped by an average of 2.8 percent, according to NASA. The minimum extent has dropped even more — 13.5 percent per decade since 1979. The ice is shrinking not only in area but also thickness, making it more vulnerable to breakup by the seas, winds and warmer temperatures, NASA said.

Meanwhile, on March 3, which corresponds approximately to the end of summer in the Southern Hemisphere, sea ice surrounding Antarctica receded to its lowest extent ever recorded by satellites, according to a NASA statement. The ice extent was 71,000 square miles (184,000 square km) lower than the last record low, hit in 1997.

This record low has some scientists puzzled, as it comes just two years after a series of monthly record highs for the extent of sea ice.

"There's a lot of year-to-year variability in both Arctic and Antarctic sea ice, but overall, until last year, the trends in the Antarctic for every single month were toward more sea ice," Claire Parkinson, a senior sea ice researcher at NASA's Goddard Space Flight Center in Greenbelt, Maryland, said in the NASA statement. "Last year was stunningly different, with prominent sea ice decreases in the Antarctic. To think that now the Antarctic sea ice extent is actually reaching a record minimum — that's definitely of interest." [50 Amazing Facts About Antarctica]

Scientists still aren't sure, however, whether this new low can be attributed to global warming.

"It is tempting to say that the record low we are seeing this year is global warming finally catching up with Antarctica," said Walt Meier, a sea ice scientist at Goddard. "However, this might just be an extreme case of pushing the envelope of year-to-year variability. We'll need to have several more years of data to be able to say there has been a significant change in the trend."